This week is finally done. I think. Roger’s anchoring the morning news on Sunday, but he’s generally home fairly early from those so we won’t count that. At least I won’t – the man who has to wake up at 3 a.m. might have something else to say about that.

But in any case it’s done, over, FINISHED. THANK GOD.

Jack turned 1 last month and I don’t know who told him he could skip a whole year and head right into the terrible twos, but I will find this person and punch them. Or better yet, leave them with my screaming toddler. All day long it’s pointing and yelling for stuff he can’t have. You hide the stuff he can’t have and he just finds new stuff to scream about.

So that goes on all day…and then around 4 in the afternoon he decides that nothing will do but he has to held by me. Not Daddy, not the cat, no one but me will do. Flattering I’m sure, but you weigh 25 pounds, child. TWENTY FIVE POUNDS. My back is killing me. Wearing him in the Ergo carrier keeps him calm for a bit, but not long enough. The pinched nerve in my shoulder starts going off and it’s game over. Jack 1. Mommy 0.

He still wakes up at least twice a night. It’s better than five times though. I could have done without the 3 hour party he threw Tuesday night. 11:20 – 2:30 PARTY PARTY PARTY. Ugh.

We went out two nights in a row last weekend. BIG MISTAKE. Two nights of staying up late to play with the babysitter equals a baby who thinks he doesn’t need to heed bedtime. So that’s been awesome…

Screaming toddler, refusing bedtime, clinging to me for hours…did I mention the pinched nerve?

Oh and I HAVE PINKEYE. It’s made the week just that much more fun.

There was a bright moment in the week though on Thursday. The temperatures soared and the whole city ran outside to breathe in the spring like air and I decided to try a new playground. I usually just aim the stroller for the closest Central Park playground; it has plenty of baby swings and that’s all we’ve needed so far. I remembered a dad in our building telling us that he prefers the CP playground a little farther north. Something about the crowd being a little less “snobby”? Ok, I’ll try it. The moms don’t talk to me in the other one anyway.

WELL. For starters this dad could have clued us in on how the equipment in the farther playground is nicer and WAY more toddler appropriate. It’s all Jack sized! He dug it. ramps with railings just his height meant he was walking everywhere pleased as punch that he could grab on and not fall down. Look at that happy boy:

And before you say it, whatever-I was at the playground with PINKEYE. I should be ashamed. I studiously avoided touching my face and frequently bathed my hands in Purell just in case. I’d been on antibiotics all week. I think the Upper East Side is safe from me.

I shouldn’t bitch at all. We’re here, we’re alive, we have a roof over our heads, food on the table and lots of love for each other. And as I was reminded on Tuesday morning by a very sad email from a friend…we’re all so very lucky to be alive and to have each other. So yeah, I didn’t get cast in a project I desperately wanted to a part of, my eyeball is on fire and oozing goo, my child hates me and loves me in the space of 30 seconds making my head spin, BUT…yeah. We’re alive and we have each other. Life is so fleeting.

And on that note, here’s my new favorite breastfeeding Jack picture – toddler edition. The babysitter brought him a balloon Sunday night. He had never seen such a glorious thing and would not let go. Not even for boob. 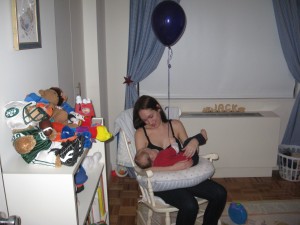 So that’s it – it’s Friday night and the kid’s asleep. I’m going to grab some Nutella and a spoon cause thank the LORD this week is done.