We’ve been sleep training Jack at night. While letting him “cry it out” is not something I wanted to ever do, it seems to be something Jack is determined to force upon us. He had always nursed to sleep. Always-since the night he was born. Key word: HAD. Past tense there folks. Right around his first birthday he just stopped falling asleep at bedtime. Wouldn’t do it. So I’d rock him. While he’d scream in protest.

Jack did not want to go to bed. We’d rock and pout and shout about it for upwards of two hours. Every single night. I put him in the crib one night when my nerves were stretched to the breaking point and he screamed so hard he threw up. (Again. Same thing happened last time we tried this) So I grabbed him up and cuddled and rocked and cried. And apologized a million times.

But, Buddy, you’re rubbing your eyes. You’re yawning. The circles under your eyes look like bruises. Take pity on yourself and fall asleep!

One day I said “bath” to him and he ran for the tub. I started noticing all the new things he DID understand. We started to talk.

“Jack, you gotta get some sleep. We’re all so much happier when we sleep. When you wake up at night just hug blankie or teddy, and they’ll help you go back to sleep.”

We made a plan and one night we tried it again. Goodnight kisses and hugs and a reminder that “we have to sleep so we can play tomorrow.” He cried. He howled. It broke my heart. But he didn’t throw up. He fell asleep.

It’s minimal fussing now. He really doesn’t want to miss out on the party. But being ticked off for a minute and then yawning and lying down with blankie and teddy is not traumatic.

When he wakes up wet or hungry (or both), I fix him up and then he goes right back to sleep. It’s kind of amazing. And since it usually only happens once a night, it’s manageable.

There is light at the end of the no sleep tunnel.

Naptime had remained easy (easy-ish This is Jack we’re talking about here). If he was tired he’d nurse to sleep in about ten minutes. And after months of my tears and begging he’d learned to take an entire nap in the crib. I could shower. I could pay bills. I could eat lunch. I COULD BREATHE.

Until this past weekend when he started waking up mid nap to scream. Today he howled. I let him howl. I picked him up and it became clear…he wants to sleep on me again. After three attempts of putting him down (even on the floor with offers of play!) it became clear that all he wants is this: 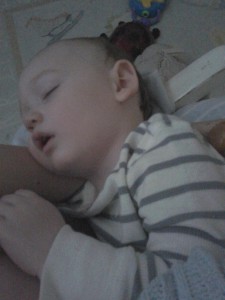 So here we’ve sat for an hour and 15 minutes now. I need a shower. I need lunch. My water bottle would be nice… oh and I need to pee.

Tomorrow, my friend, you’re going down for your nap awake. The nursing to sleep no longer works. This screaming and howling doesn’t work for either of us. I’m sure if you gave me a break I’d be able to read that damn sleep book and it would say I’m massively screwing up by not doing naps the same as night, but you were happy nursing to sleep for naps! I was happy letting you! It was peaceful. There was no crying…  You seem determined to cry. Why???