There’s so much beautiful gathered in one spot, and I swear it’s all designed to make me feel like crap because my floors are dirty and the dining room chairs don’t match the drapes. There are tons of fabulous crafts and activities to do with your kid, and they all make me feel like crap because my kid would rather throw his sippy cup at my head and scream for a timeout. But I keep pinning away. Someday I may own a home again and I might REALLY need to make a bulky portable color palette to carry around as I search out twee accessories to “enliven” the space. Right.

Most of the stuff I pin for kids are crafts that he’s not old enough for yet, but soon he will be and I’ll be ready to whip up some homemade play-doh or finger paint (stop laughing, it could happen). I’ve pinned a few “toddler” specific activities and haven’t gotten around to doing any of them. He’s young and easily contented with a shoebox and a stack of index cards. Also, running up to strangers in the park to give hugs or a hard stare is popular. So I really haven’t had a need to get all Martha Stewart with the boy. Yet.

Then we came up on the end of May and little man had an ear infection. No biggie, we went home with some antibiotics and dealt with it. On day 9 of the antibiotics we discovered that little man is allergic to them. Oh boy. Now THAT is something worthy of another post and I’ll get there, but let me just say that 6 solid days of an itchy, swollen rash is no fun for a 15 month old. No fun for his parents either. By the end of it we were all exhausted and cranky and tired of each other. Jack was miserable and basically wouldn’t eat much of anything the whole time. He just wanted to breastfeed. EVERY. HOUR. I was ready to shoot myself.

When the storm had passed and it was clear he was better I started to try to convince him that he really didn’t need to nurse that much anymore. Food is delicious! Have some! Play with your toys! (seriously, stop clinging to my leg) It took about another six days to convince the child that nothing disastrous would happen if he played quietly alone again. Or you know, ATE FOOD.

In the midst of all this recovery period, I remembered pinning this post on a “Discovery Box” the blogger made for her daughter. She has lots of pictures detailing a pretty wrapped box with drinking straws inside and various containers for the child to put them in.  I saw it weeks ago and thought, “well he likes drinking straws, that could work” and pinned it. Something made me remember it while trying to distract poor Jack and not having the time to wrap a box in pretty paper and gather assorted objects (like I’d really do that anyway) I walked to the kitchen and grabbed the bag of five million Ikea drinking straws we bought while I was pregnant (labor coach said we’d need them! hahahahahaha) and threw them in an Utz Pretzel container I had marked for the trash bin. 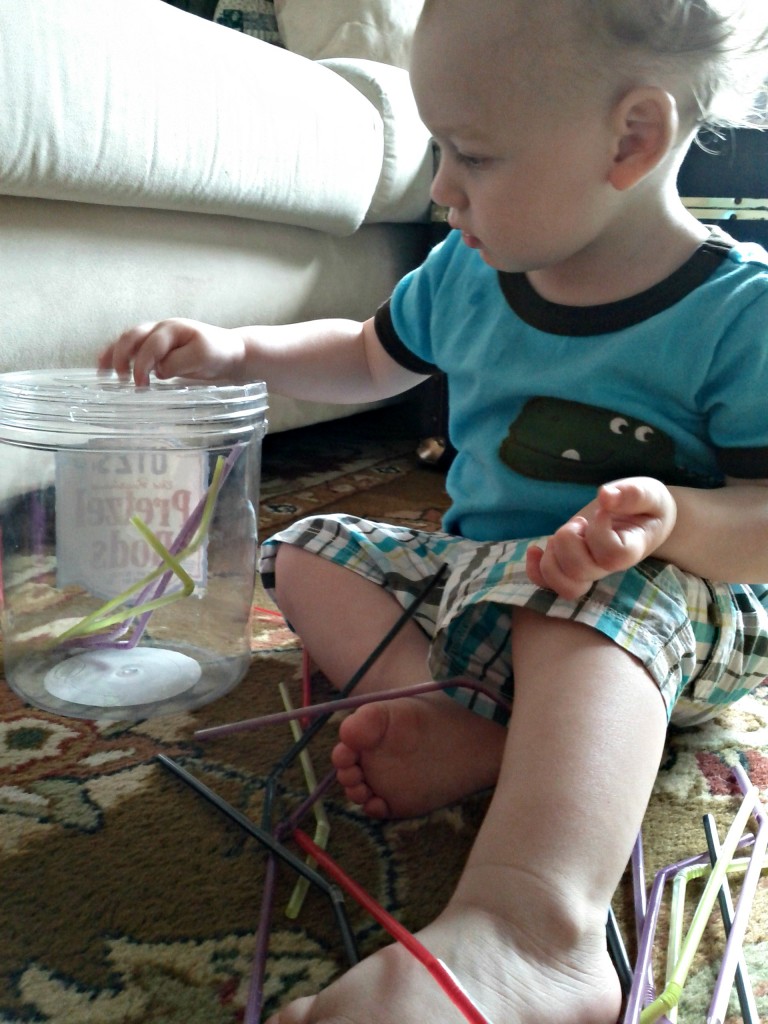 And just like that I had at least 10 minutes to sit in the rocking chair with a cup of coffee – and no baby attached to me with velcro. It’s his new favorite toy those damn straws. A few days after I took these pictures Roger asked, “Are we done with the straws? Can we just throw them away now?”  I believe I said something along the lines of, “Are you fucking kidding me???”  That man is CRAZY! 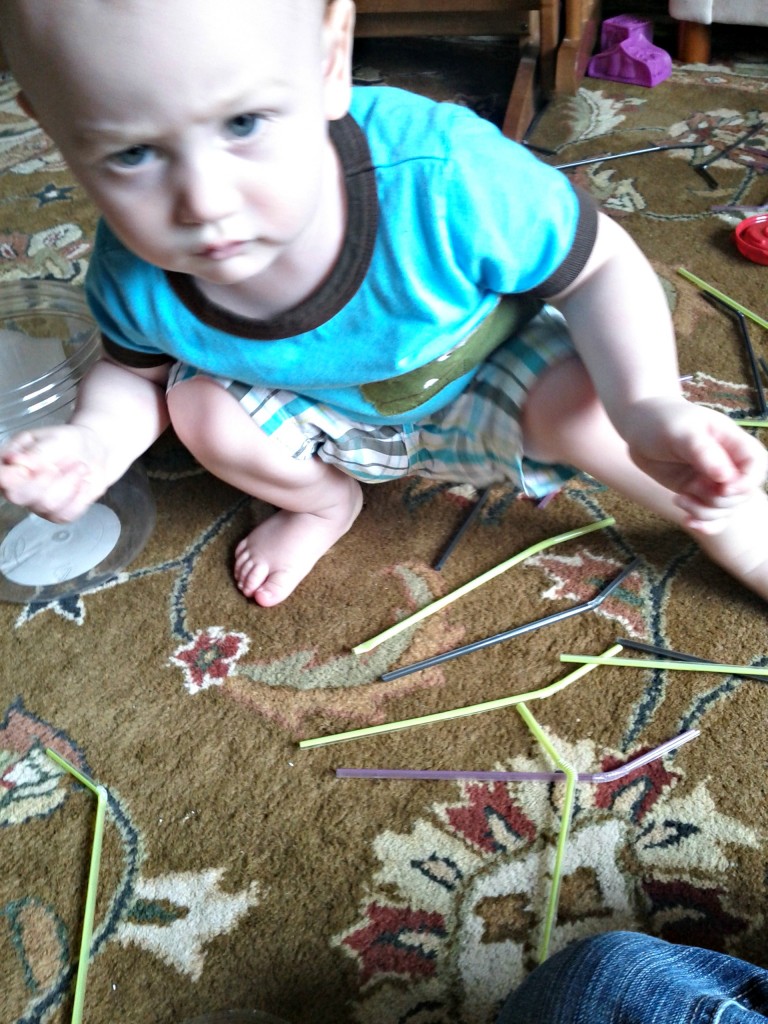