I don’t know what tomorrow has in store, but it needs to be a little less bumpy than today was. Okay, Universe?

We had Jack’s 18 month check up scheduled for 9 a.m. He’s healthy and right on track! High fives all around… Alas though, the poor kid has learned what shots are – he was moderately upset the whole darn doctor’s visit (as toddlers are likely to be) and then the nurse came back in with the two vaccines he was scheduled for and he lost his shit. Poor baby saw those two needles and flipped the eff out. Whoa.

So that was fun.

We got all calmed down and dressed again and I told him we could go to the playground for some fun now! And he was SO GOOD. He was even playing with other children. PLAYING. WITH. OTHER. CHILDREN. Until another little kid had a meltdown and then they ALL HAD A MELTDOWN. Four little boys who had previously been happily pushing little cars around in a circle went full on screaming meltdown. Cause they all wanted the same damn little metal car. But in the middle of it this French woman who has been there both days this week was very mellow and we both just stood there watching them self destruct. Her boy remembered Jack from yesterday and was the instigator of the “hey let’s play cars!” game. I’m envisioning bilingual playdates. YES PLEASE. (What? Getting ahead of myself? Shut up.)

Anyway as a reward for not biting anyone or hitting (even though some other kid almost poked his eye out with a stick – I am not making that up) I turned a blind eye (ha!) to him running in the sprinkler fountains in his regular clothes and shoes. Whatever – he deserved it. I mean, look at that face. Two shots in the morning? Kiddo you can have this joy. I love you! 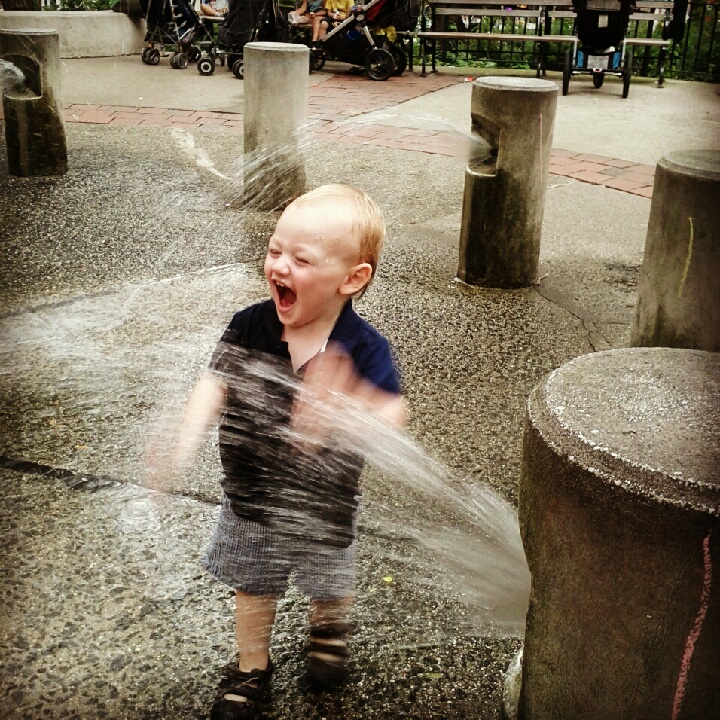 He was so soaked I had to strip him down and stroll him home in nothing but a diaper and a towel. For some reason I had a towel, but no clean clothes in the stroller. Supermom! Some idiot in the elevators of our building commented that he must be cold “dressed like that”. Dude, it’s 85 outside. Lay off. Go raise your own kid.

We had lunch. He threw a fork at my head. Again.

He napped. He woke up screaming. Again.

Suddenly he fell. He fell hard. Like my heart stopped beating HARD. I scoop him up. Quick check for massive injuries. Goose egg on the way. Grab frozen peas (hurrah for grocery delivery!), kitchen towel, and phone from counter on our way to the sofa. I offer him a boob. Breastmilk helps everything, right? He stops crying and nurses and lets me ice his forehead. He seems ok other than the lump rising up. Using my phone I google head injuries. I make myself completely neurotic.

I mean, you have to understand that when I was kid I hurt myself. A lot. Normal kids fall and cut their chin. I would fall, cut my chin AND fracture my jaw. You can see how I would panic easily.

I want you to know that I totally did not text Roger to say, “You’re hanging out with cops right? Any EMT’s there???” No way, I would never do such a thing.

Jack is ok, but for the large bump he’s got and I imagine that will be a black eye when he gets up in the morning. Poor kid. Start the day with some shots and end with this: 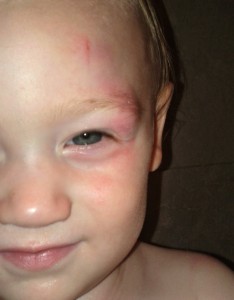 Thanks for using the flash, Mom. Extra special.

I gave him extra Mr Bubble in the bathtub and about ten bedtime books. All while monitoring his eyes, potential dizziness and alertness. Cause that’s how I roll and uh, he FELL ON HIS HEAD.

I’ve only snuck in his room three times since bedtime to check on him.

So very, very ready for tomorrow though. Please let it be peaceful. With no bumps.