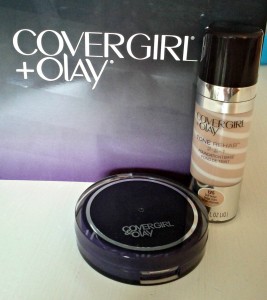 When I was given an opportunity to try the new COVERGIRL & Olay Tone Rehab 2-in-1 Foundation and pressed powder via BzzAgent, I’ll admit I was pretty excited as I’m a loyal Covergirl user. I’ve used their products since high school and am never without their pressed powder. I also use Olay moisturizer twice a day.

The foundation contains Olay Hydrating Serum and I’m guessing that’s what makes it literally glide onto your skin. This stuff is seriously smooth. I’ve tried many foundations over the years and usually hate them all. This one gives great coverage that feels very light going on. I found it easy to control the type of coverage I wanted. The pressed powder contains something called “Smooth-glide serum” and it gives a great finish on top of the foundation. I’ve also been enjoying using it solo for when I need a fast and simple look (i.e. daily). The only thing I don’t like about the pressed powder was the applicator. I’ve since swapped it out for one I prefer (the cotton puff type) and I’m much happier.

I’ve been very pleased with this duo in day to day use and even took the look out for a trip to Brooklyn. Steamy hot subway ride from the Upper East Side out to Williamsburg. 2 Subway trains and a bit of a walk, drinks with a girlfriend, a show in a theater that disliked their air conditioning and a return subway trip…my makeup held up. Definitely a good sign. Also, my girlfriend didn’t say anything like “Are you wearing lots of makeup?”. Another good sign.

This morning I went to the playground and after hearing that my son had woken up at 2 am, 4 am and then again at 6 am, another mother commented, “Wow, you sure don’t look like it!”.  I was not wearing under-eye concealer. I’m sold on this stuff.

One thing to note is that the foundation does have a slight fragrance so if you’re very sensitive to that type of thing, this may not be a good product for you. I personally liked it.

What’s that you say? You want to see some photographic evidence? I give you my world famous, crappy phone pictures once again (if someone could find the battery charger for my real camera, I’d very much appreciate it!): 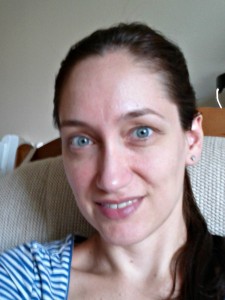 After – just the foundation and powder: 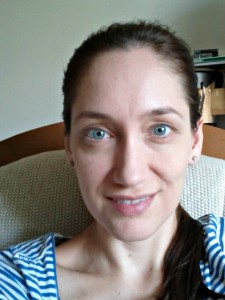 After – with the addition of mascara, light blush and some lipgloss. Nothing else. 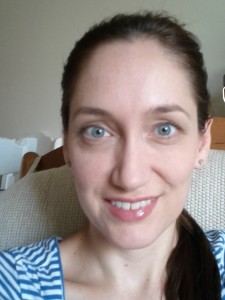 If you’d like to try COVERGIRL & Olay Tone Rehab 2-in-1 Foundation it has a suggested retail price of $13.99. I have some $2 off coupons that were sent to me, if you’d like one, shoot me a note and I’ll pop one in the mail to you. First come first served 🙂

Disclosure: I received a full size sample of Covergirl + Olay Tone Rehab 2 in 1 Foundation and Covergirl + Olay Pressed Powder and several coupons for free as a part of a BzzAgent Campaign. All opinions expressed above are my own.