Once upon a time it was a beautiful time of day. The wee lad would merrily play away while we got him cleaned up from a long day of play and throwing food. His tugboat and an empty shampoo bottle provided hours of fascination and gentle play. For some reason though the past few weeks saw bathtime devolve into a major battle of wills.

He’d cut us a sly look and hurl an entire boat full of water in our faces.

“If you throw the water again, you have to get out.”

He would throw water.

We’d make good on our threat and he’d melt down into a screaming, sobbing mess of a child who only wanted to throw more water at his parents. He’d scream if we tried to shampoo his hair. He’d fuss if we’d insist he got more than a cursory wash with soap. It was no longer pleasant. We took the toys away. He threw the sopping wet wash cloth. He used his arms to scoop up water and splash like a wee maniac.

“Jack. The bathtub is NOT the ocean. We DO NOT splash in the bathtub.”

It was clear that a new routine was needed. For a few baths some fizzy color tabs worked, and then he saw Elmo on the container and wanted to dump the whole thing in the tub. He flipped out when I informed him it could not go in the tub and no he would not be putting all 100 tabs in the tub. It was a bad scene. Thanks a lot, Elmo.

I went on a hunt for soap crayons the next day thinking that he might like to just color the walls instead of hurling water, but came up empty handed. We skipped bathtime altogether, completely defeated by the thought of more crying (his and ours). The next morning I sent Roger a text asking if he could please run into the children’s store on 86th Street and look for soap crayons. He came home with soap crayons, but also these awesome “Rub a Dub Stickers for the Tub” (amazon affiliate link…just sayin’):

Bath stickers in the shape of cars and trucks. 31 stickers of car, trucks, buses and road. Oh my GOD, genius. Roger said, “Well I saw them and kinda thought he’d like them. They had alphabet ones and other stuff, but these are CARS.” Now see, I’d have done something dumb like get the alphabet cause it’s all educational and whatnot. I really doubt the alphabet would have gotten this reaction. Squeals of delight at the packaging and then he was so excited he forgot to breathe…and then intense bathtub concentration for about an hour.

An hour of that. I’m not exaggerating. 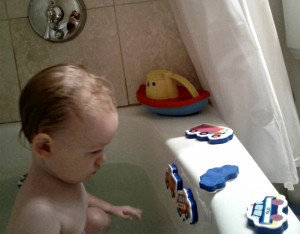 We haven’t even touched the soap crayons yet. And yeah, Roger’s 100% in charge of toy shopping now. He’s just better at it.