For the past week or so I kept trying to write something down about Hurricane Sandy. As the storm traveled toward us I made a trip to Target on Friday (a months supply of diapers and wipes, LED camping lantern, enough batteries to power it for 15 solid days…) and placed a massive grocery order with Peapod. Yeah, I had my hurricane supplies DELIVERED Saturday morning. I highly recommend it. Four loaves of bread, peanut butter, Chef Boyardee, baby food in pouches, dried fruit, shelf stable milk, etc all without battling the crowds. I pulled our official NYC go bag from the closet and checked the radio, batteries, glo-sticks, cereal bars, etc.

I thought I should maybe write a humorous post about me, high on a hill in NYC over preparing for a possible hurricane. But we were busy. Roger was put on alert by the station: all hands on deck for storm reporting. He would be reporting from Coney Island live Monday morning starting at 3 a.m. We were cramming in some last minute family time knowing that he would be out for a few days. I contemplated taking Jack and staying with friends, but they were in the path of this massive storm too. We decided I’d stay here with my bunker of provisions. I pulled out an air mattress to inflate if things got rough and we needed to sleep in the windowless hall.

On Saturday I saw Roger tweet a joke about having to tape shut the hole in his rain boots. On Sunday I demanded we go buy him new rain boots. You can’t really let your husband go stand out in a hurricane in rain boots that have holes, that’s just…bad. So we, along with half of the Upper East Side, found ourselves buying rain boots on Sunday morning. There was an air of…excitement? I don’t know what it was really – it was bizarre. People were dropping $150 on fancy British rain boots, and lining up at ATMs, grocery stores and liquor shops. Why do we all wait until the last minute to take care of these things?

By Sunday afternoon the MTA had announced all mass transit would be shut down that evening. The station called to tell Roger he had to be in by 7. We ordered Chinese for dinner. Jack and I waved goodbye to Roger at 6:30 and settled in for our nighttime routine alone. My mother called and at one point asked if I had a good book on hand to pass the time during the storm.

That question cracks me up.

I was to be stuck inside alone with my 20 month old for the duration of a hurricane. Alone. My husband is standing on a beach as the damn storm comes in. No, I never once opened a book. We got together with other housebound families in the building to have the kids burn energy off. I checked Twitter compulsively on my phone for updates on the storm, checking on Roger, and emailing with my tight circle here in town. I kept the television in our bedroom permanently tuned to NY1. Jack and I would periodically go “look for Dada!”. Monday night we ended up actually using that damn air mattress. A huge piece of scaffold on our building came loose during the height of the storm and we were ordered to stay out of our bedrooms (they look out on the scaffolding). I kept checking Twitter and Facebook and the news and watched the horror of the storm unfold across the city. Our friend’s house in Rockaway was flooding. Hospitals were being evacuated. Downtown was blacked out. People were trapped. Breezy Point was burning to the ground and the fire trucks couldn’t get there. This is New York City…we were powerless.

I spoke to Roger around 9 – at that moment he was not on air, but could not sleep. He took the station car and drove out into the storm and called into the station. A friend emailed that she heard him on air. I. Was. So. Pissed. I get it. I really do. He’s a reporter. He reports. He can’t not. But I’m hiding from the storm on an air mattress with our toddler and my husband is driving around in the height of this storm.

And yet what I was reading, seeing on the news and hearing from friends and family around the tri-state? We were so lucky and don’t think I didn’t know it every single moment. Our power flickered here on the Upper East Side, but it never went out. There was flooding down the hill from our building, but we were high and dry. The scaffolding did not break through our windows. I never had to touch the gallons of water I had bought just in case. I ended up loaning one of my three flashlights to a friend who needed to go check on her cat in the waterlogged, powerless Lower East Side she had fled when the ConEd transformers blew. Later we took the water and other supplies I had bought to a donation center for those who needed it. I counted my blessings again and again.

Roger came home Wednesday night at 6:15 p.m. Almost 72 hours since he had left. He had a lot of soggy laundry. The rain boots were filthy. We managed to give Jack a little bit of Halloween before bedtime and then fell asleep on the sofa together. All too soon it was 2 a.m. and Roger had to go out again.

Someone said I should do a blog post on what it’s like to be married to the reporter who’s standing on the beach as the hurricane rolls in. Well, it’s weird for sure. It is very weird and unnerving to see your husband standing there saying that this area has been evacuated…and yet he’s standing right there and plans to stand right there through the whole damn thing. Um. Yeah. But I’m proud of what he does and really grateful he doesn’t do anything more dangerous. Hell, I could turn on the TV the whole time and see what he was doing/going through. A lot of other people didn’t have that option with their spouse. God bless all the first responders and their families. Seriously.

It’s post storm reporting now and everyday we’re seeing more and stories that stun us. Last night in the Rockaways, people built fires out of their destroyed furniture to stay warm. We need to get help out there. To Staten Island. To Red Hook. To New Jersey. To Long Island. To every community affected by Sandy. Now.

You should take some time and read this blog that our friend, Bob Hardt has been keeping on the NY1 website. He lives in Rockaway Beach, steps from the boardwalk that is no more. Bob has opened his house to us every summer with such graciousness and generosity. Jack put his toes in the ocean for the first time at Bob’s house. I think of Rockaway Beach with much fondness and it hurts to see it hurting so.

If you want to donate time or money or goods to the relief efforts here you should read this post on Cool Mom Picks. They’ve done a much better job rounding up all your options than I ever could. Included is my current favorite group, Occupy Sandy. Occupy Wall Street has turned themselves into an amazingly mobilized group of volunteers, gathering supplies and dispatching volunteers as they find the need. Their Twitter feed is updated constantly. Follow them. Give. Help. 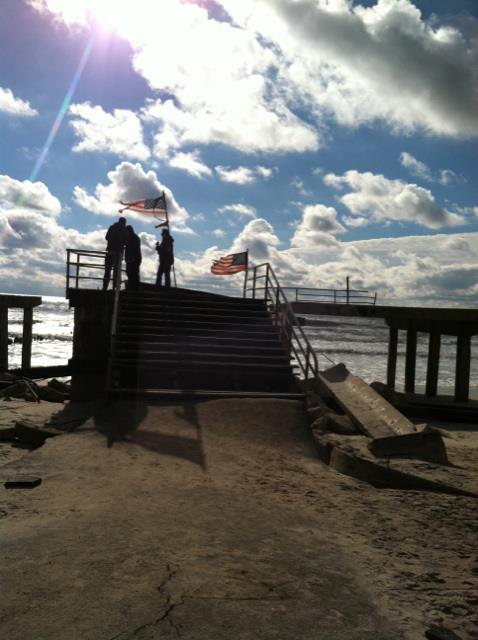