Dear self, the next time you want to get all happy and self-congratulatory about how GREAT things are going…do yourself a favor and shut the eff up. Okay?

When last we spoke I wrote this little gem about Jack growing to understand that sometimes Mama’s gotta have a life outside of this apartment and the care and tending of him: “…it’s cool for Mama to go away sometimes. It’s really NOT the end of the world”.  Hmm. Well he WAS buying it. I swear things were going great, it was the weekend before Thanksgiving, the show was swell, he was a happy kid, I was a happy mama-you get the picture.

Suddenly it was Saturday evening and I started to make dinner and simultaneously curl my hair in show preparation and all hell broke loose. Jack was clinging to my leg, sobbing as if the curlers I was using were trying to take over his mama. Dinner was boiling over, I was losing my patience and Roger was sick. Sick as sick can be. We had had a sitter scheduled so he could come see the show, but around 3 in the afternoon I called her to cancel. Things were going south fast.

I escaped the apartment to the sound of Jack sobbing for me. Swell.

The show went on. I didn’t screw up any lines. The audience applauded. I think it went well. Honestly though I’m a little hazy on the details – I was starting to feel a little off.

The next morning, the Sunday before Thanksgiving dawned. Roger was sick, I was sick. Jack was…oh hell, Jack was barfing. We called the pediatrician because clearly he didn’t have what we had. “He’ll probably have diarrhea in an hour.” she warned us. Swell.

Merry freaking holiday season to us!!!

So that was our Thanksgiving week. We recovered enough to host the big meal. Jack developed an ear infection though and kept us up all night in misery. For several nights.

Our kitchen counter turned into a pharmacy: 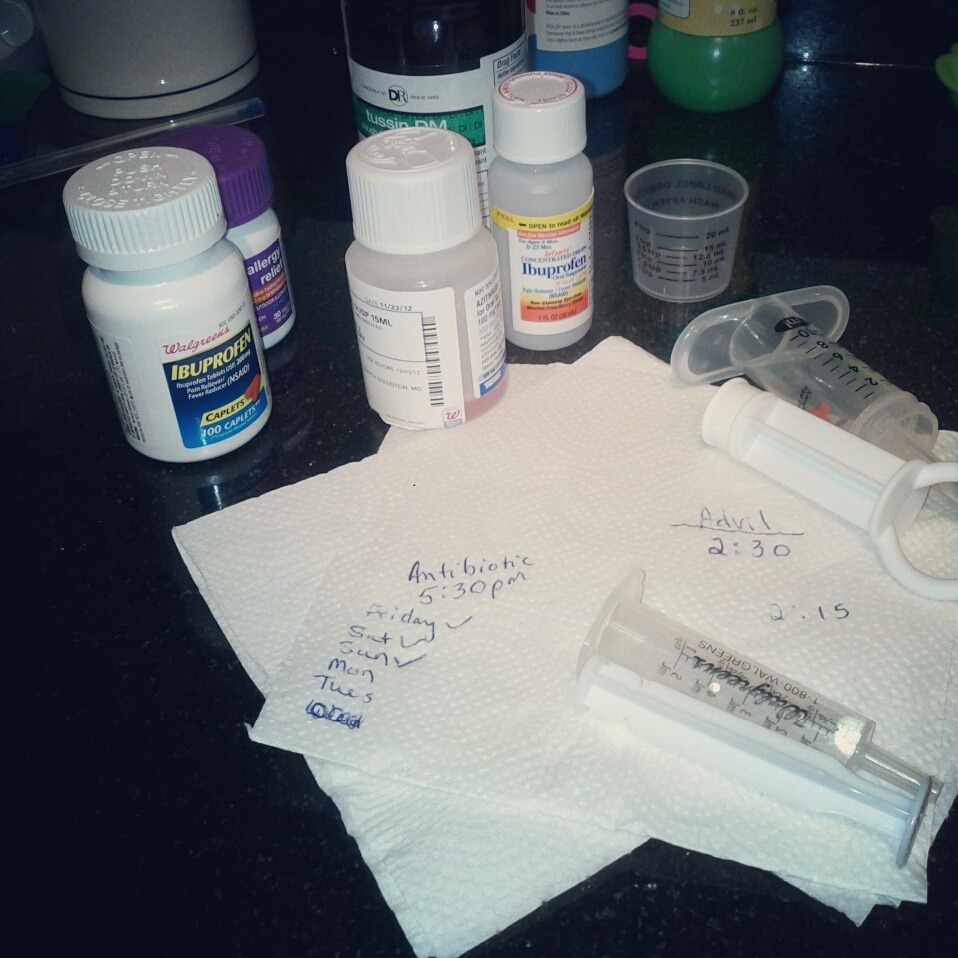 Merry Freaking Holidays To Us!!!

We seem to have recovered though, but somewhere in the coughing and nose blowing and puke clean-up my excitement for the holidays dimmed. I mean COME ON UNIVERSE. Give us a break here. Don’t send a puking toddler to two parents already suffering the cold of the century. Play fair.

I gather that sometime during the past week, while we were fighting through this, Christmas arrived in NYC. Jack and I passed a tree stand the other day. When did that get there? There were Christmas carols playing in the grocery store and the window display in the toy shop is all sparkly and holiday themed now. How dare you all sneak this in on me! This was going to be the year I was going to be ready early! My decorations are still in storage and I still haven’t figured out how to fit a tree into this apartment. ARGH!!!! I feel like I have this conversation/break-down every single year. I’m never going to get it right, am I?