It has been 16 days since I last posted. Classic holiday withdrawal/panic/overwhelmingneedtohide was in full effect. Which really sucks. I was so looking forward to Christmas this year. Jack is old enough to really enjoy the sights and sounds and I knew he’d get a kick out of presents under the tree and visiting grandma down South with all that room to play and run. He did all of those things – I’m pretty sure he had fun, I however, was miserable. This has to stop. There is only one resolution I’m making this year and it’s to not do this crap next year. I’m taking small steps like leaving the box of decorations in the front of our storage unit – labeled and highly accessible. The Advent calendar will be stored in our hall closet here in the apartment so it is ready to go even if the lights and angels are not.

No seriously, this got hung up on the 13th… 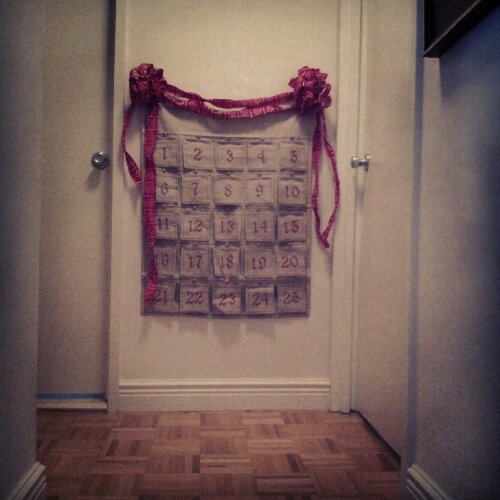 I may not be able to fully stop the serious case of holiday blues I get every year, I mean Prozac hasn’t even fixed them some years… BUT maybe I CAN take some steps to help with the panic and the ridiculous need to be super mom/woman/giver of joy. Yes, I know it’s stupid to try to be all that, but my brain insists I try and then mocks me for failing. Every. Year.

I’m going to challenge myself to knock out a small list of things that I wish were done every year. Stockings. I’d like us to have stockings. They do not have to match, but I do insist that I make them. Something in me is crying out that my stockings should not be mass produced. I have tons of fabric sitting right here, a sewing machine and the know-how. DAMNIT THERE WILL BE HANDMADE STOCKINGS. A tree skirt would be nice too, but let’s not go crazy, ok? Once a month I will take a little break and craft a little Christmas thing. Or a big Christmas thing. I will enjoy it. If I do not, I will throw it down the trash chute at the end of our hall.

One small thing a month to not lose sight of what I am promising myself. The annual Christmas depression and freak-out has got to stop. I’ll report back monthly on my progress. Feel free to ask me how it’s going if I forget. Maybe if I take steps to knock out the things I wish I had done for Jack and for all of us, I’ll be better able to cope when life throws curve balls like the two family members in hospital this Christmas season. Maybe. Can’t promise anything, but I’ll try.

And now to remember what went on these past two weeks as we passed through Christmas and New Year’s and came out into this bright shiny (and so far frigid) new year.

Jack and I finished our Christmas shopping the morning before we left for North Carolina. Thank God the UppaBaby stroller has a giant basket otherwise we’d have been screwed. Next year, let’s start the shopping a wee bit earlier, ok? 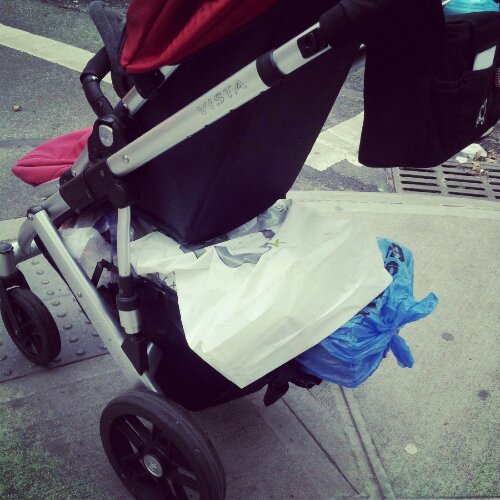 It leaves more time to breathe in the scent of every tree stand you pass. 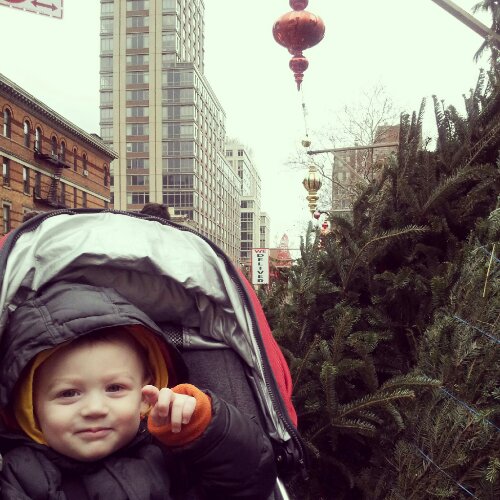 Airfare was going to be over $1500 for the three of us so we said eff that and rented a car. Jack did…ok. We broke the trip into two days each way. He is not used to riding in a car so he gets pretty pissed off sometimes that he’s strapped in. A few new toys and me sitting next to him singing silly songs helped a bit.

There was a lot of traffic on I-95. We were not surprised. 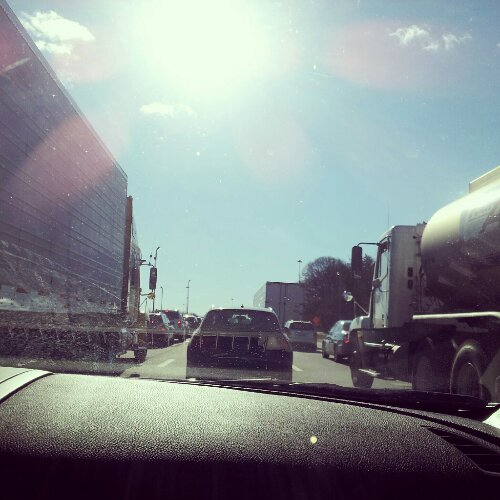 We introduced Jack to the fine dining at Cracker Barrel. This was AFTER his epic, lying on the floor screaming tantrum cause we made him leave the gift shop. Sorry about that one, and yes, we tipped the waitress exceedingly well. 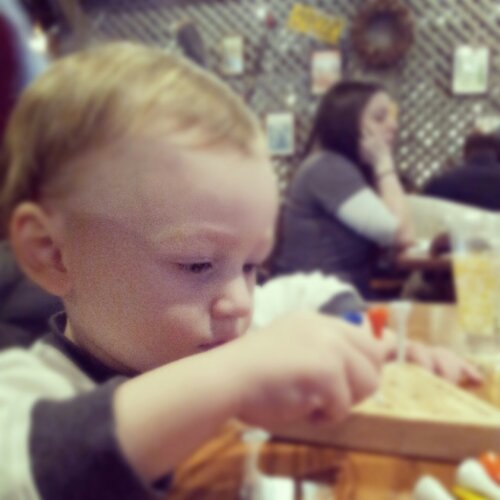 My mother’s tree did not disappoint. We did not have one (see my overwhelming stress and Jack’s penchant for soccer in the living room) and I promised the boy that grandma would come through. At his first glimpse he shouted “WOW!” and loved sitting by it every day. Alright, next year we’ll get a tree. 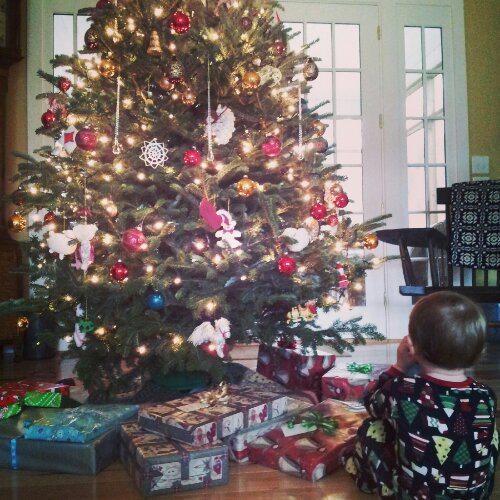 He was thoroughly spoiled on Christmas morning. I have video of him reacting to the giant firehouse we arranged for Santa to leave, but putting that up would take me another four days…we’ll have to make do with this adorable shot of him worn out from excitement but not completely willing to let go of the toys. 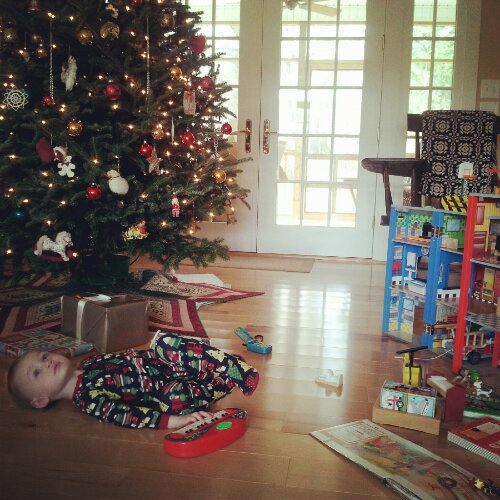 We had Bojangles a lot. Basically every time we got in the car we found another excuse for sweet tea and biscuits. 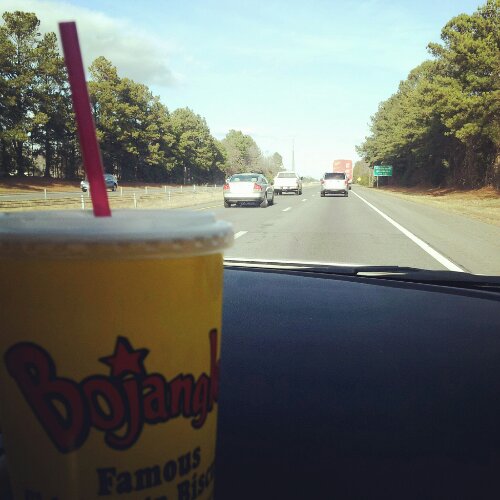 We made our way home a day later than planned due to the crappy weather the Northeast experienced. One family member was released from the hospital (hooray!). I developed a whopper of a sinus/tonsil infection with a side of hacking cough and spent the morning of New Year’s Eve in urgent care collecting antibiotics. Then we bundled Roger up for work that night. Unlike the previous years I’ve been with him, he did NOT have to report live from Times Square. It was a blessedly quiet evening for news and he surprised me by getting home by 11:00! We hurriedly opened some champagne and hit the couch – together at midnight on New Year’s Eve for the first time.

I’m going to take that as a good omen for the year. Begin it as you mean to go on. We were together us three (Jack was even asleep!) and that is all I really want for 2013. I want us.