My physical therapist asked me tonight if we had a good weekend, “do anything fun?”

I had to stop and think about it before answering because I honestly could not remember. Weekend? When was that? Do…? What did we do… Hmm. I think we hibernated. The official term must be hibernation. It was freezing outside – what else are you going to do?!

Saturday Jack and I introduced Roger to the new place we take Mommy & Me class at. I miss Jack’s little music class dearly, but we joined a place that’s literally across the street from our apartment and it offers open play time almost every day. Have you met Jack? He’s a one man wrecking crew. Indoor playspace is the best thing to happen for us in a long winter of frigid temps. We took Roger over to show him around and to enjoy the sight of Jack STILL not knowing how to chill out. (seriously little guy, that other kid just walked by – he’s not going to steal your freaking soccer ball!) 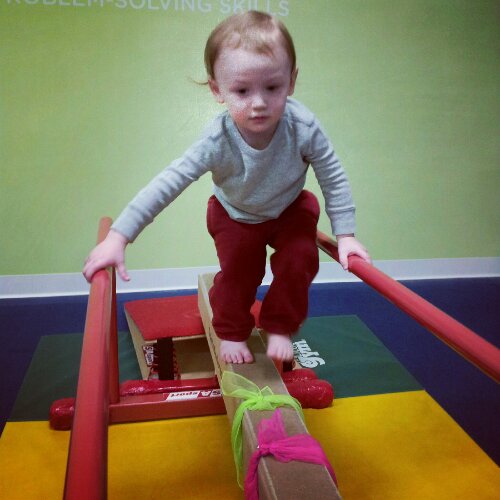 Aunt Mary & Uncle Davie would be so proud!

After we left the gym we were dragged down to Second Ave to walk around the block to see all the Second Ave Subway construction. Whose bright idea was it to tell the kid that all those trucks and bulldozers and cranes are building a new choo choo? Oh right…ME. Well done self, now you have to walk down there at least once a day.

Following this activity there was an awesome two hour nap all snuggled up together in the big bed. Oh yeah!

Then we went out to dinner in the Times Square area with friends in from out of town. I feel like that sentence is seriously redundant. OF COURSE THEY WERE FROM OUT OF TOWN! Times Square. Eating. Yeah, not local. On a related note, feel free to leave a comment with your favorite family friendly restaurant in the Times Square area. We are forever being asked this question and forever end up eating somewhere crappy with the out of towners who want to stay within a five block radius of their hotel. Oy.

Jack has developed a new love of eating out. As long as there are French fries involved he is in heaven. Sports on the television? Even better. SUCH. A. BOY. The evening scored bonus points for Jack because it featured a subway ride on the way there and ride home in a car (taxi) afterwards. Whoa transportation! 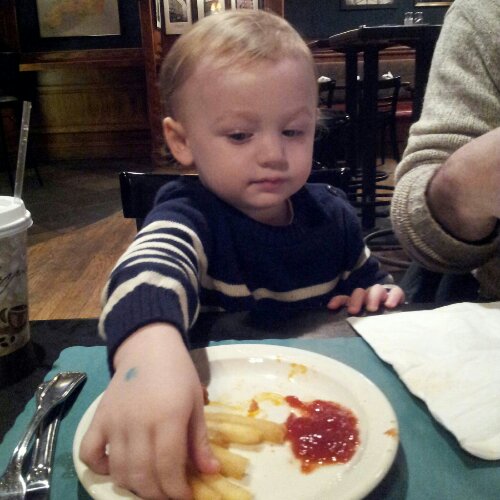 Sunday we hibernated. Roger and Jack walked a few blocks to get bagels and came back inside to tell me it snowed! MAMA SNOW! Rosy cheeks and cold fingers – he was so excited and adorable and I really wish there had been more than half an inch of snow. I would have taken that kid all over town to play in snow at that moment. Instead I remembered we had a grocery delivery coming and I opted for a hot shower. I may or may not have stayed in there for 30 minutes. I could hear him playing with Roger and no one was bothering me. Hot shower. Alone. Mama Heaven. 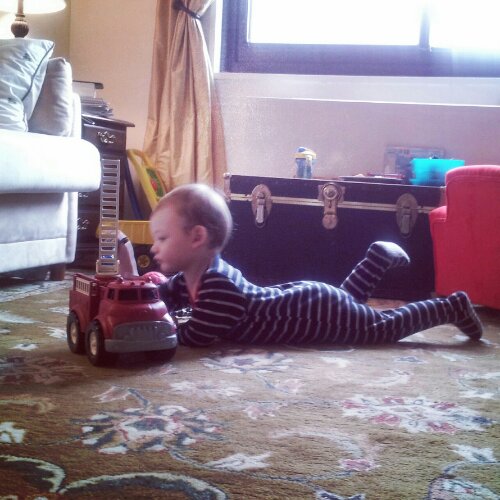 We wore a lot of pajamas.

Lunch. No nap. Early dinner. Bath. Early to bed for the boy. 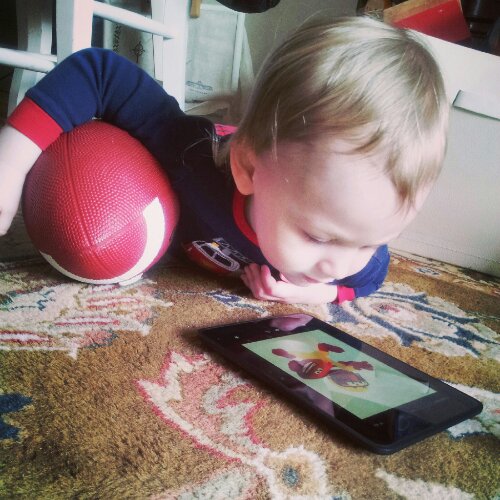 Super bowl tweeting marathon for me and Roger.

I didn’t leave the apartment once – and my pants featured an elastic waistband all day long. I’m gonna call that a win.

It’s possible that we were also storing up alone time in prep for the coming week. Jack is turning two and family is on the way to celebrate. I’m stressing about cooking and cleaning and the inevitable family squabbles that will happen. I’m breathing deep and hugging Jack a lot and helping him to practice saying “TWO!” Cause yeah, my baby is going to be two. It’s just possible that we needed to be us three alone for a day doing nothing much but being us three.