(I know these birthday posts should come a little sooner to actual birthday time rather than TWO WEEKS LATER. But life is busy and my computer is dying. It’s limping along valiantly, but blogging is difficult at best on this thing. Anyway…I was paging through photos from my phone tonight and just couldn’t stand the happiness these snow photos gave me. I think this was my favorite day this winter so far. So indulge me as I recall the bliss of Jack’s birthday snow day – really the best kind of snow. Birthday snow.)

I’m a January baby, and as a kid one of the rarest birthday treats growing up in the South was snow. I think maybe twice the stars aligned and Mother Nature gave me snow as a birthday present. I loved her for it. It never occured to me that Jack, being a February baby might have the same bliss as a birthday frosting of snow. Well hello, Nemo! (seriously? We’re going to name winter storms now too? Oy.)

Winter storm Nemo blew into town the weekend of Jack’s second birthday and gave us almost a foot of snow to play in. While this wasn’t Jack’s first snow – it was the first he could really suit up for and fully experience. We’ve got snow boots, snow pants, snow mittens and TWO sleds. We don’t mess around here. 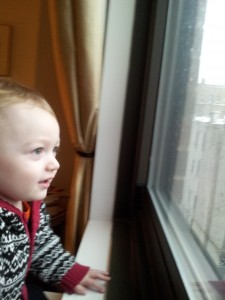 Standing in the window, shouting, “SNOW!” is great fun, don’t you know?

Naps and dinner were had and I couldn’t stand it anymore. I insisted we put on our gear and go outside while the snow was really starting to accumulate. You just don’t know what might happen overnight. What if the good snow disappears? How can you miss the opportunity for a snow walk?

Jack made it about five feet outside of our building before he froze in uncertainty. Can you walk in this stuff? Roger decided it was time to give the boy a snowball and wouldn’t you know that broke the spell? For about an hour we stood outside as the snow blew and the light faded and we threw snowballs at trees. A passing man stopped to tell Jack to keep at it, “You make us old folks happy!”

We had to bribe the kid to come inside eventually – I told him we could keep that last snowball in our freezer. 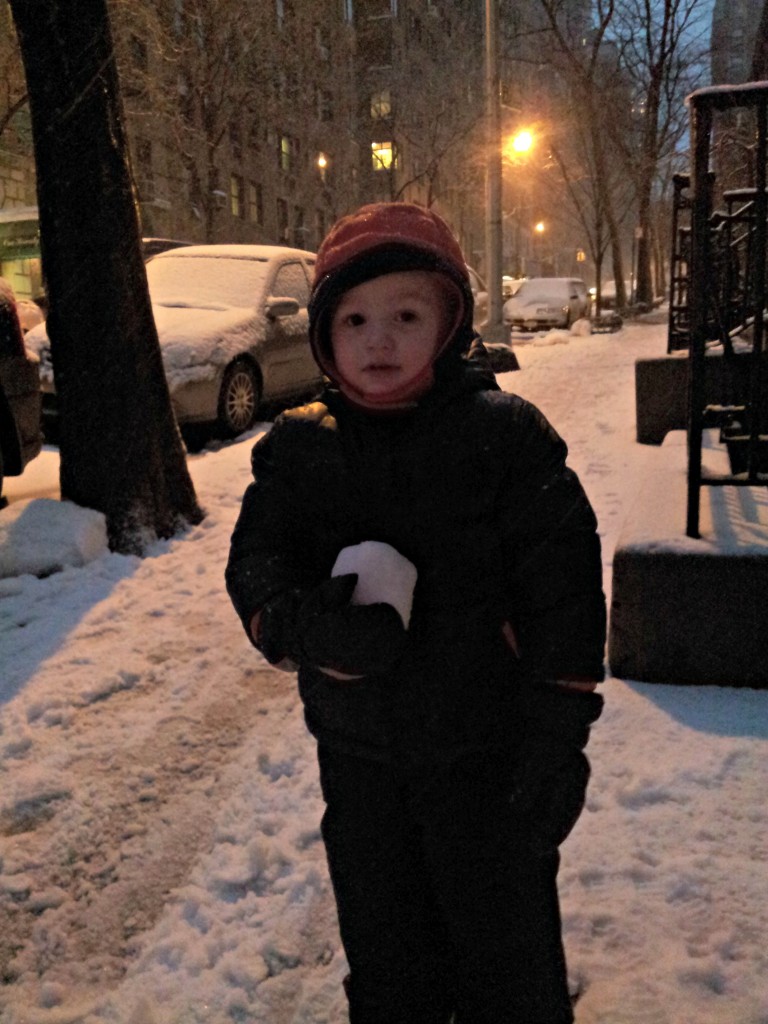 Morning dawned and his first thoughts were, “More snowballs?!?!” Hell yeah, Buddy, do you know who you have for a mother? I love snow! Off we went to join the crowds at Yorkville’s sledding hill. One of the blocks in the neighborhood is blocked to vehicular traffic and when it snows it’s the most popular spot in the hood. Everyone was there. Roger paid an absurd amount of money for a bright orange, plastic sled at the pharmacy at the top of the hill. (we had a sled already, but it was up in storage and we are hopelessly stupid and never thought to go retrieve it beforehand) I mean once your kid sees all the other kids on sleds? You best find a sled, Daddy, and I don’t care if it is $30.

After we went down the hill several times Jack decided he needed to be in charge and off we went into Ruppert Park for sled dragging. Around and around and around he dragged that sled. I almost died of cute. 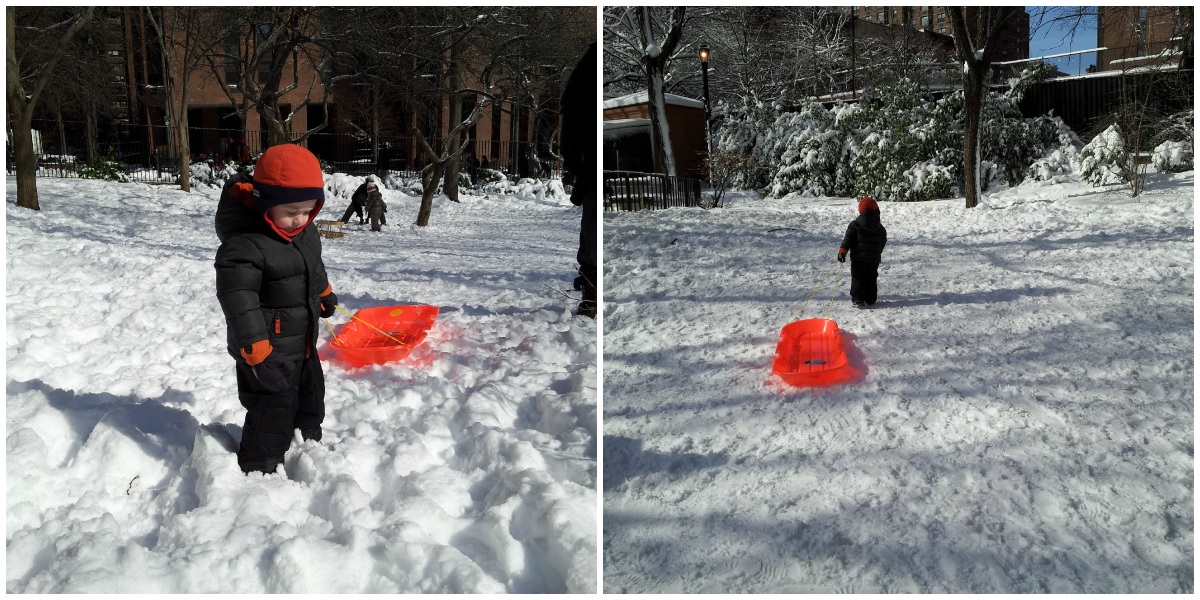 And did you know that playground slides are AMAZING in the snow? 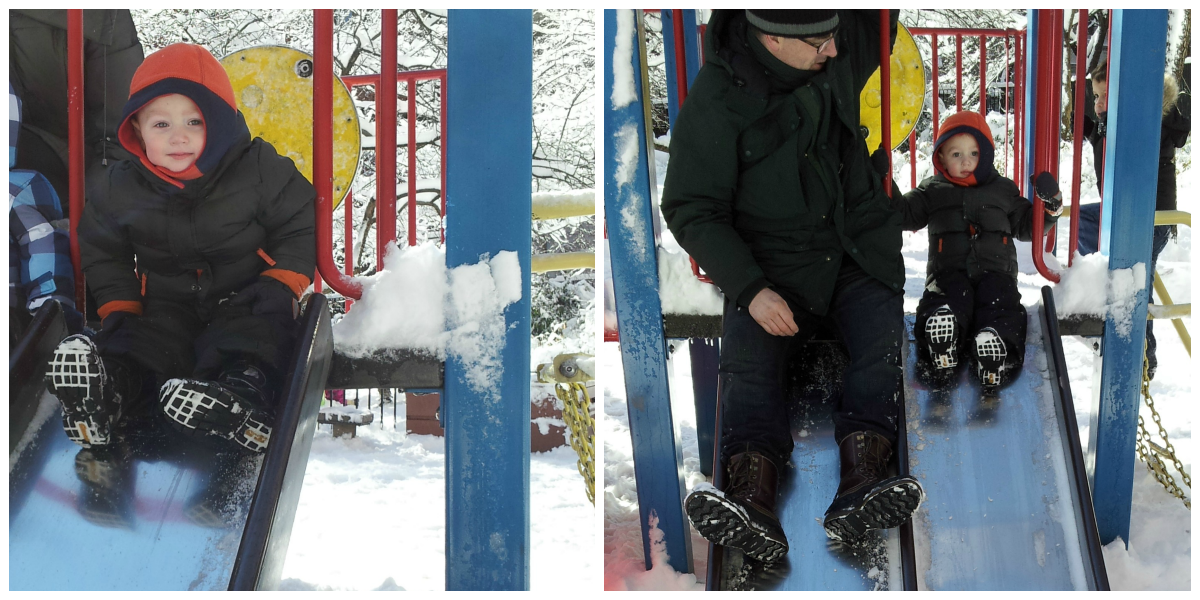 All photos of him actually going down the slide are blurry. Cause the slide was frozen – an ice slide is a fast slide. Right into a pile of snow. Oh my.

After two and a half hours of snow play, with our toes and fingers going numb we insisted it was time to go home. For days afterwards all talk was of snowballs. “Throw snowball tree!”, and always with the insistence that “Mama too and Dada too” threw snowballs as well. The snow was awesome, but what made it even better was that Mama and Dada and Jack were all three together throwing those snowballs. Man, sometimes the way this kid loves us is just flat out overwhelming.

We love you too, Buddy. May we all have many more snow days to celebrate together.

Now where the hell am I gonna store this extra sled? We paid $30 for this damn thing – we’re keeping it!