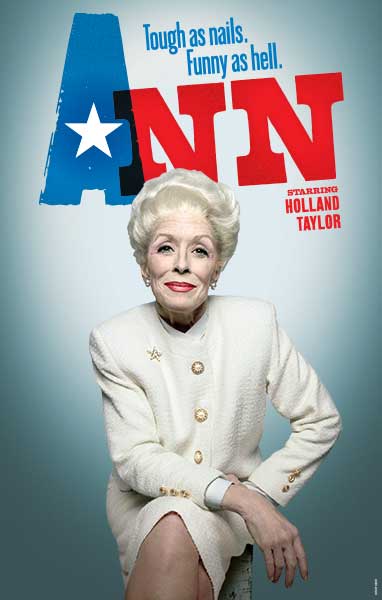 This past Friday I attended a performance of the Broadway show “Ann” courtesy of Culture Mom Media, and I was blown away by two things: Holland Taylor and the woman she is portraying, Ann Richards.

“Ann” is a one woman show researched (for years), written, and performed by Holland Taylor. It begins with the former Texas Governor delivering an imaginary commencement speech after her term has ended. We are then taken back through time to hear of how this woman came to be who she is and where she went.

Ann Richards was a fiery, passionate woman with a large personality (and that hair!) Holland Taylor nails it. From the suit to the hair to the attitude and all the way to the Texas accent. She IS Ann Richards, off-color jokes and all. At intermission my friend and I admitted we were exhausted just watching her. How the heck was she doing this night after night? We’re exhausted after one five minute monologue! This is a two hour show! And for the most part it’s a tight two hour show. The pace is fast and fierce and leaves you bowled over with admiration for what Ann Richards did – what she fought for and believed in. There’s a moment in the show when she looks out at the audience and very simply says, “Life isn’t fair, but the government should be.”

I wanted to pump my fist in the air and shout yes. Damnit YES.

Now this isn’t a perfect show, there are times when it does seem to wander a bit and overall we felt it went on a tad too long – some things just weren’t necessary to the story being told. (A 9/11 reference? I never need that unless it’s essential…I just don’t need to be jolted out into my own unhappy memories of that day, you know?)  BUT the personality and force that is Ann just keeps pulling you along and somehow you don’t mind too terribly that little ramble she just went off on.

I’ll pause here for a moment to give a shout out to the set design. Don’t you just miss corded telephones? I mean, the cord on this woman’s phone is almost a character of its own. The Governor’s office? My own dear Southern mother should see those shutters. THOSE SHUTTERS! Stunning set decor. After Ann loses her bid for reelection the governor’s office slides back and away into the darkness, seeming to shrink before our eyes. It’s theatrical perfection.

We left the theater itching to read more about Ann Richards, and the merchandise kiosk in the lobby was happy to oblige. There are two books available at the theater, and I will be diving into one soon. I left the theater completely awestruck at Ms Taylor’s performance and her obvious love and admiration for Ann Richards. I have been inspired. By them both.

Disclosure: I received two tickets to the show. All opinions expressed are my own.