I recently attended the Big Toy Book Baby Palooza (more on this one later!) here in New York City where VTech was a sponsor. They generously sent us home with an InnoTab 2 Baby for my two year old, Jack, to try out. I was pretty darn excited to open this thing up and get him playing with it because I’m tired of having to hide my Kindle Fire. Let’s face it, kids love tech toys. You can make all the plans you want to raise them without screen time, but the second they see shiny, shiny tech…it’s all over. 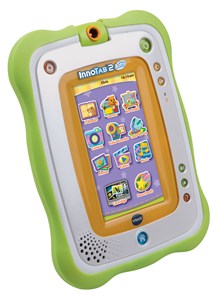 The InnoTab 2 Baby is a tablet designed for children ages 1 to 9. It comes pre-loaded with content specifically for infants and young toddlers, including an app to help you and your child learn Baby Sign Language. It has all the features of the InnoTab 2, but has been designed to be handled a bit more roughly – it even comes with a removable gel bumper to help protect it from the bumps its youngest users might give it. As your child ages you can download more games, apps, videos, books, etc from the VTech download center on their website, the Learning Lodge Navigator. All InnoTab cartridges and downloads are compatible with the InnoTab 2 Baby. So while the tablet may say “baby” on it, your kid isn’t locked into baby games.

I found it very easy to set up right out of the box. We were in the car driving out to Jersey when I opened the box, entered Jack’s name on a profile and handed it over. He was happily playing with the Chugga Shapes game within a few minutes, (very simple game – a train drives by with some shapes, you touch a shape and it tells you its name and then you get to “pop” several as they float on the screen) in fact he wouldn’t give the darn thing back to me to show him anything else. Chugga Shapes it was for 24 hours. 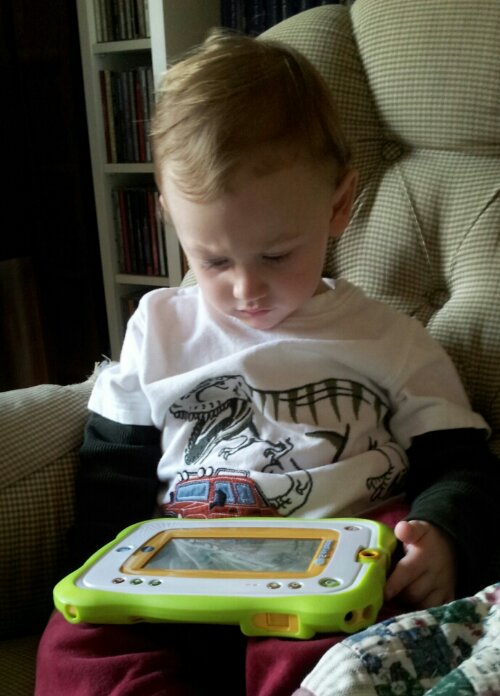 Jack & his InnoTab – complete with furrowed brow of concentration.

When I was able to plug it into my computer, I found registering it a very easy process. It came with two free download credits (for the cheapest apps only) so I chose two things I thought he might like and they were quickly added to the device. We’ve explored the camera and Jack really likes having his own camera to take pictures of toddler nonsense with. I plan on purchasing the Thomas & Friends cartridge, because HELLO, you can get books and games with your kid’s favorite characters featured. Thomas? Fireman Sam? Jack will be super excited for that.

Now what’s not so cool about this tablet? The loading time. It takes some time for it to power up and each time you change screens or apps you are presented with a loading screen for a few seconds – up to a full half minute. That doesn’t sound like much, but to a two year old used to an iphone or ipad, that’s basically an eternity. I sat with Jack and talked him through a mild hissy fit about this. I explained that it’s just the way this toy works; we have to wait. He understands the wait time now and has stopped pushing the home button like it’s going to magically solve the problem.

My other issue is the battery. Or lack thereof. It runs on four AA batteries. You’d better stock up on them or buy rechargables. You can get a wall adapter but being tethered to a wall outlet kind of kills the fun of running around taking pictures or curling up in your blanket fort to sing along to nursery rhymes.

You can read more specs on the InnoTab 2 Baby here. All in all I think it’s pretty nifty. I do think that saying it will last until a child is 9 is kind of stretch. I think kids are getting pretty tech savvy and this just won’t cut it for the 9 year olds I know. Maybe the older kid games and books change that though, I don’t know. Also, they aren’t going to want something that is clearly labeled, “Baby”. Just sayin’. But at $89.00 (available exclusively at Wal-Mart) it won’t break the bank either so this is a good solution for the younger crowd. Do remember though you’ll be buying additional apps and cartridges along the way. Not a huge issue for me as I know most of the quality kid’s games for my “adult tablet” cost money too. At this point, I’m pretty glad to have my Kindle back. Now if VTech could somehow get that construction truck puzzle game Jack likes so much on the iphone into InnoTab form…I’d swoon.

(Update 5/7: We downloaded some videos (Fireman Sam and Thomas & Friends) from the Learning Lodge to Jack’s InnoTab last week to help keep him entertained on a long car drive. The download was really fast even on my ancient laptop. The video quality? REALLY GOOD. We were amazed. So much so that I feel a need to update this review to remark on it. Excellent video quality! We also downloaded the Bubble Alphabet game at the same time and a week later Jack is now singing the ABC song completely and correctly. Nice!)

Disclaimer: I was not compensated for this post. We received a VTech InnoTab 2 Baby for the purposes of this review. All opinions expressed are my own.