What is it about children and Mommy being sick? It’s like they can sense our weakness and ramp up the crazy.

I’ve been fighting a summer cold all week, and last night I lost the battle. It’s here – a full on nasty summer cold.. I would cry, but that would make me cough again.  Seriously the snot level is out of control over here. Is there a store that will deliver both tissues and whiskey? Cause I’m almost out of tissues and am in serious need of a tea and whiskey hot toddy.

Also someone to take this kid out of my hair. I’ve already had to hide the baseball bat, a balloon and a double-decker bus that was driving on my face.

We’ve watched the same episode of Team Umizoomi five times this morning. Maybe six. I’m a little fuzzy on details. I tried lying down with him, but that led to me getting kicked in the face. So I’m sitting at the table saying, “Mommy’s talking to Aunt Mary on the computer, ok?”.  Umi Ice Cream Truck can only work for so long though.

He’s starting to climb the furniture. 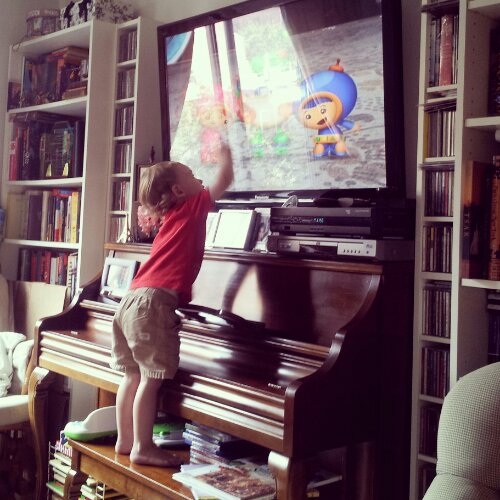 I’ve already bribed with waffles and a smoothie. Does McDonald’s still deliver in the city? I just want to lie down and take a nap and feel better. Oddly, Captain No Sleep won’t play nap. Grrr.

I can’t blame him though, the sky is a brilliant blue today. His first words on waking this morning were literally, “Oh hey! It’s sunny outside!” I’d want to be outside too, playing and enjoying this divine weather. Instead he’s stuck with me. I mentioned the babysitter and he freaked out on me so I guess hiring help is a no go. I should be flattered that he’d rather spend a beautiful day inside with me. I’m not though. I’m too tired. I spent three hours sleeping on the floor by his bed last night so he’d sleep too.

See? They ramp up the crazy.

How many hours till his father comes home?

What do you do when you’re sick and your little one won’t give you a break? Don’t give me that line about lying on the floor and playing “coma” though. Already tried it. Total fail.