I wrote this out mainly as an exercise to let it go on the advice of my shrink. I’m having a hard time with that so I’m hitting publish…while breathing in and out and drinking a cup of tea.

We spent last week in Florida. It was a vacation with a super sized helping of temper tantrums. So maybe we can just call it a “vacation” and leave it at that. 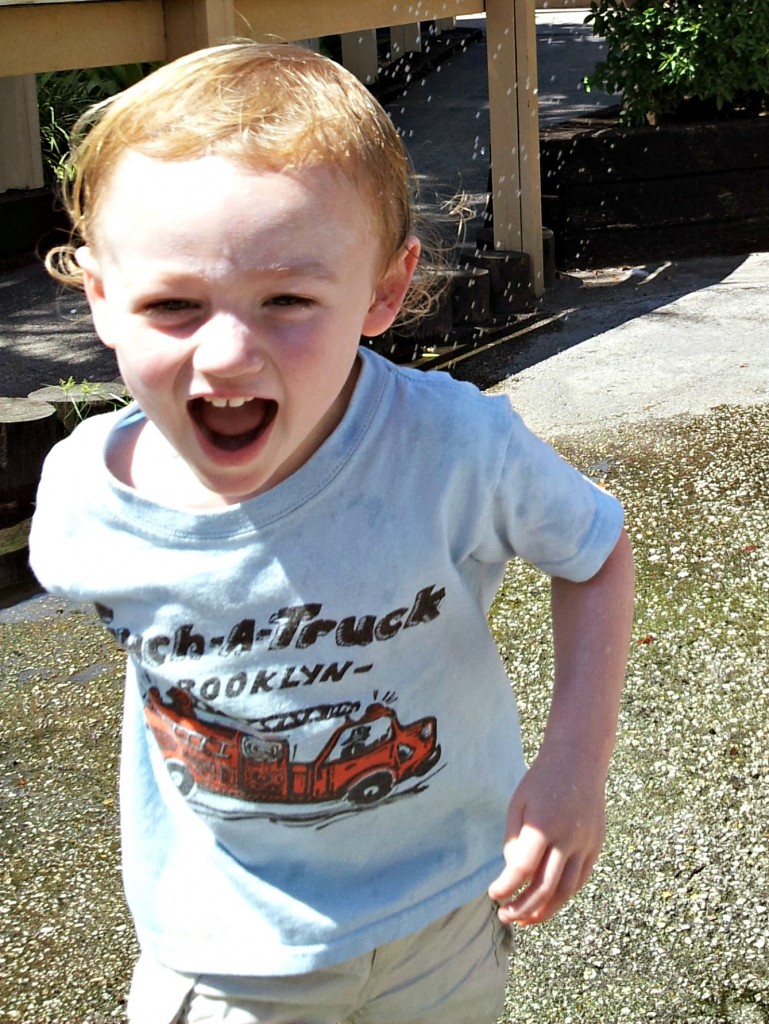 I’m not really sure where to start here. I learned something big last week while on vacation, but I’m not proud of how hard it was to learn. I am not proud of how obstinate I was in the face of this. Yes, I did know that you are your child’s number one advocate. It’s my job to defend him and figure out what he needs and how to get it done. I knew that, but there’s a big difference between knowing that casually and KNOWING it. Living it. Owning it.

I am really disappointed in how I handled this trip. Jack was in full on bratty, brat, brat meltdown mode the entire week. You could blame it on the sleep, the change in schedule, but honestly his sleep wasn’t that bad and certainly nothing we haven’t seen before on previous vacations. Stay up late, sleep in, maybe or maybe not nap. Roll with it and he’s okay and pretty normal.  No, this behavior was 100% because he was being asked to sit still what felt like every other minute of the day for him.

First we were staying somewhere so completely non childproofed it was a little ridiculous. There was an open electrical outlet right over his head in his sleeping spot. (yes, I moved things around to cover it, but um…hi?) The first night there he ran into a metal bar just the height of his nose-he was bruised for the first half of the week. So much was “do not touch!” I took a few things and moved them higher up on my own after it became obvious no one else was going to. The pathetic few toys I had packed completely failed when put up against a condo full of things he was told to DO NOT TOUCH.  I mean…that’s the freaking siren song to a two year old. Let’s get real here.

Home cooking was not on the agenda. Vacation for some means dining out. I remember those days fondly…then I remember I have a two year old and I want to weep. Dining out can be hellish. The conditions must be perfect to enjoy a meal out with a two year old. So there we were in restaurant after restaurant trying to convince Jack to sit still. Even for breakfast. To get to these restaurants? He had to be strapped into a car seat which is not part of his daily life. Guess what? He is not a fan.

So basically it was DO NOT TOUCH!, then let me strap you down for a bit (and stop kicking the seat!), come here and sit still while we eat and talk over your head, get strapped down again!, rinse and repeat. Over and over.

A mere 24 hours of this and he went haywire. He stopped listening. He started hitting us. Someone took my pretty decently behaved two year old and replaced him with a monster.

And it was all our fault.

I feel like I failed him because really I could have insisted on buying groceries and cooking for everyone. I could have just left the restaurant and taken him for a walk. Put my coffee in a to-go cup. I was trying though. I was trying too hard to keep everything perfect and I failed him. I turned into mean mommy when I should have stayed calm, understanding mommy and made sure he got several hours a day to run free. It’s the bare minimum of what we do here.

Jack needs physical activity. It’s very plain and simple, and I did not make sure he got it.

We went to the beach once. He was overjoyed and had so much fun running around. When the storm clouds piled up again and we had to pack up he begged me “can I stay here?”. 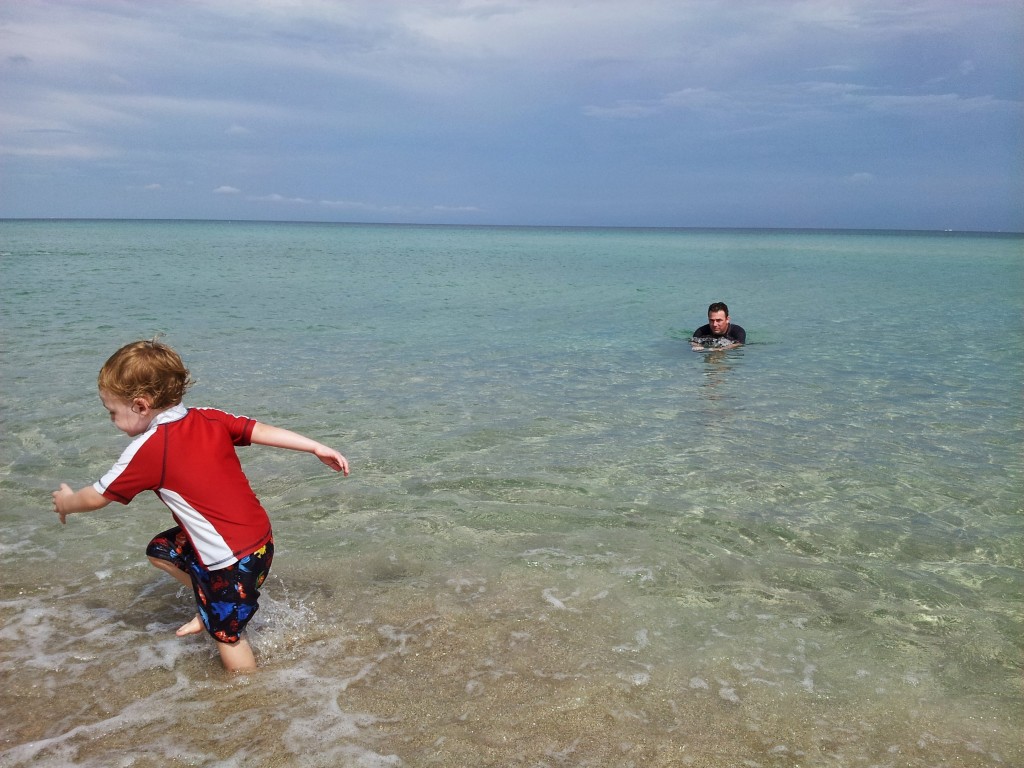 There were tennis courts and a swimming pool so we managed to squeeze in some time there, but it was cut short both times by the grownups. He did get a new racquet while we were there and every morning became “can we go play tennis?!” 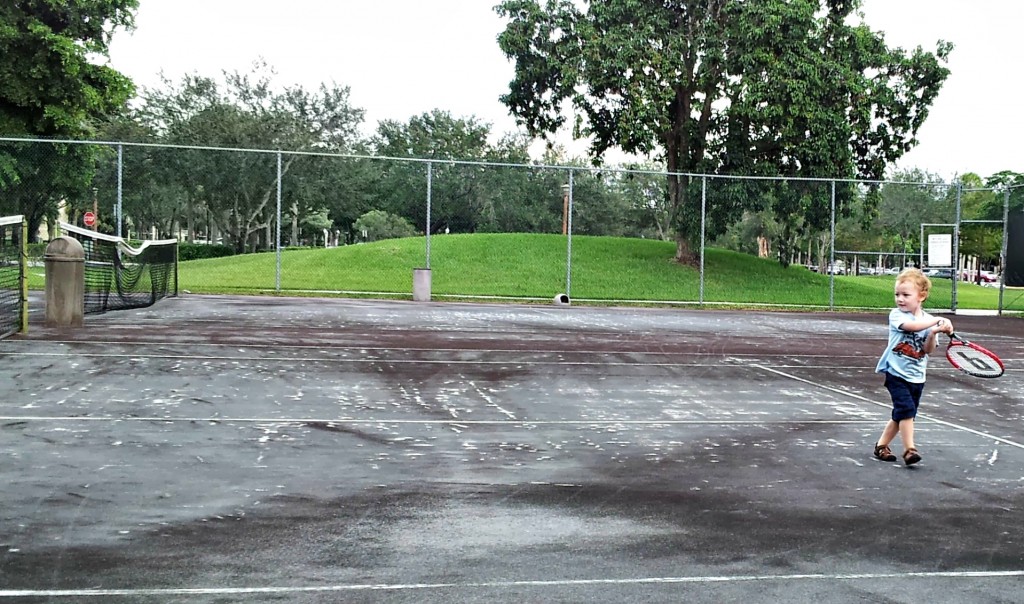 My two and a half year old? He can totally return your serve.

Something else we learned? Jack does not care for killer whales. Or dolphins. Or really much of anything in an aquarium except for sea turtles. Again, I should have known. We go to Petco and anything bigger than Nemo in the fish section scares the crap out of him. But hey, I was trying to make the group happy.

Here again I failed. There was a playground and I should have just gone straight there and told everyone to meet us there later. You’d think I would have learned by day five. Nope, I just kept pushing my child to “behave”. I made a conscious decision to NOT go to the playground because he’d only want to do that and nothing else. And what the heck would have been so bad about that?!?!

I am embarrassed I wouldn’t let my kid be the kid he is. His behavior went off the charts bad because of it. Everything was frustrating him.

The airport was hideous on the way home- he was throwing his shoes and running in circles and people were staring and it was awful. Then we strap him down on the plane and I took two seconds to pee and you’d have thought someone was stabbing him with the screaming that went down. All because I dared to pee alone. I curled in a ball in my seat and put his blankie over my head and wept. I felt like a total failure of a mom.

We’ve been home for three full days now and I’m still not finding the humor in all this. It just doesn’t exist. I’m just so disappointed in myself. I know my kid. He needs hours of physical activity every day. It is simply not optional with him. And on top of everything I think all of us involved kept forgetting that he’d been sick only days before with an ear infection and bad cough. Sit still, behave, reign yourself in…may as well try to lasso the moon, people. This is Jack we’re talking about here. He barely sat still as an infant.

There were good moments for him, yes. Look at that picture on the beach! There are fun memories to pull out and discuss and we’ll make those stick. For me personally though, I have a lot of thinking to do. I failed my boy big time and I need to make sure I don’t do it again. Asking a child who needs as much activity as Jack does to forgo that and to remain calm and collected is just plain ridiculous.

It’s three and a half days later and I just spent two hours on the playground correcting his behavior again and again. It’s going to take a lot of work to get us back on track and I have no one to blame but myself.

Breathe in…breathe out…I’m letting it go. I’m turning to you my friends who’ve been here before. What solutions do you have for vacationing with small ones whose needs don’t exactly mesh with the rest of the group?

Failing that…anyone have a good book recommendation for raising a high energy child?