We’ve been trapped in the apartment all weekend thanks to a wicked stomach virus the wee one has come down with. The early stages involved lots of puking and watching cartoons. No one had the will to do anything else. We even ordered dinner in (for those still capable of holding food down…).

Day two found Jack feeling a bit better, but not enough to go to the park or on a play date. When the allure of endless cartoons wore off we had to find activities that were calm enough for a two year old with lingering tummy troubles. I remembered our coffee can game and felt like a hero when that kept him happily amused and sitting still!

In the interest of playing nice and sharing a winner in our house, I give you the world’s easiest toddler game to make: 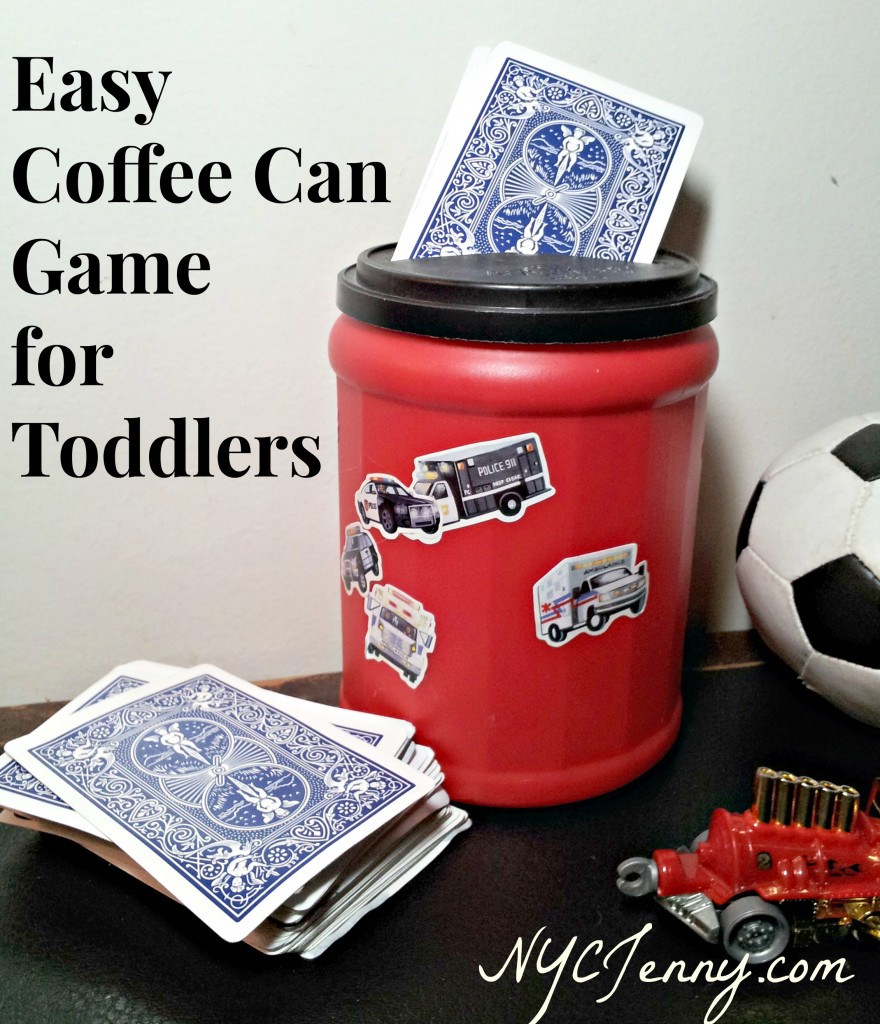 I forget how old Jack was when I first made this, but he was pretty young. Maybe just a bit over one year? The idea came from a friend’s mother who emailed me some good games for a young one. HUGE thanks to her, because Jack adores this humble coffee can game. We broke it out during our housebound Hurricane Sandy days last year and a lot of kids in our building had fun playing with it. I keep it on a shelf and break out it out when we need a quiet game.

You will need one coffee can with a plastic lid and a deck of playing cards. You can also grab a package of stickers if you want to decorate the can as we did.

We did a little minor craft project first and used a package of cool emergency vehicle stickers to decorate the can before playing the card game. What kid doesn’t love putting stickers all over something?

When we first made this game I had assembled everything ahead of time and put it away to wait for a rainy day. It’s brilliant for a rainy day activity. First you have some sticker fun and then when they’re done with that you pull out the deck of cards and introduce the game that will REALLY keep them busy.

This is such a simple project that has provided so much entertainment and seriously works those fine motor skills. Particularly in that 12-24 month range I think. Jack would sit with this coffee can and concentrate so hard his little brow would furrow. I looked everywhere for a picture of it, I know I have some somewhere… I’ll update this post if I ever track them down. I promise. For the record he’ll be three in February and this game is still fun – we now identify numbers on the playing cards and count the objects (i.e. How many hearts can you find?). For example, I’ll turn it into a number hunt and tell him to find a specific number card to add to the can.

Simple, cheap, and educational. Work those fine motor skills! What an awesome mom you are for making this one 😉