Where oh where have I been this winter? This blog has been so very silent – I dare say you all think I’ve given up! No, no, it’s just that I’ve chosen to spend my winter being a part of a beautiful new theater piece, “I Shall Forget You Presently”. Doing so has meant though that I must live out the adage, “You can’t have it all”. Particularly you, mama, you most certainly may not have it all. 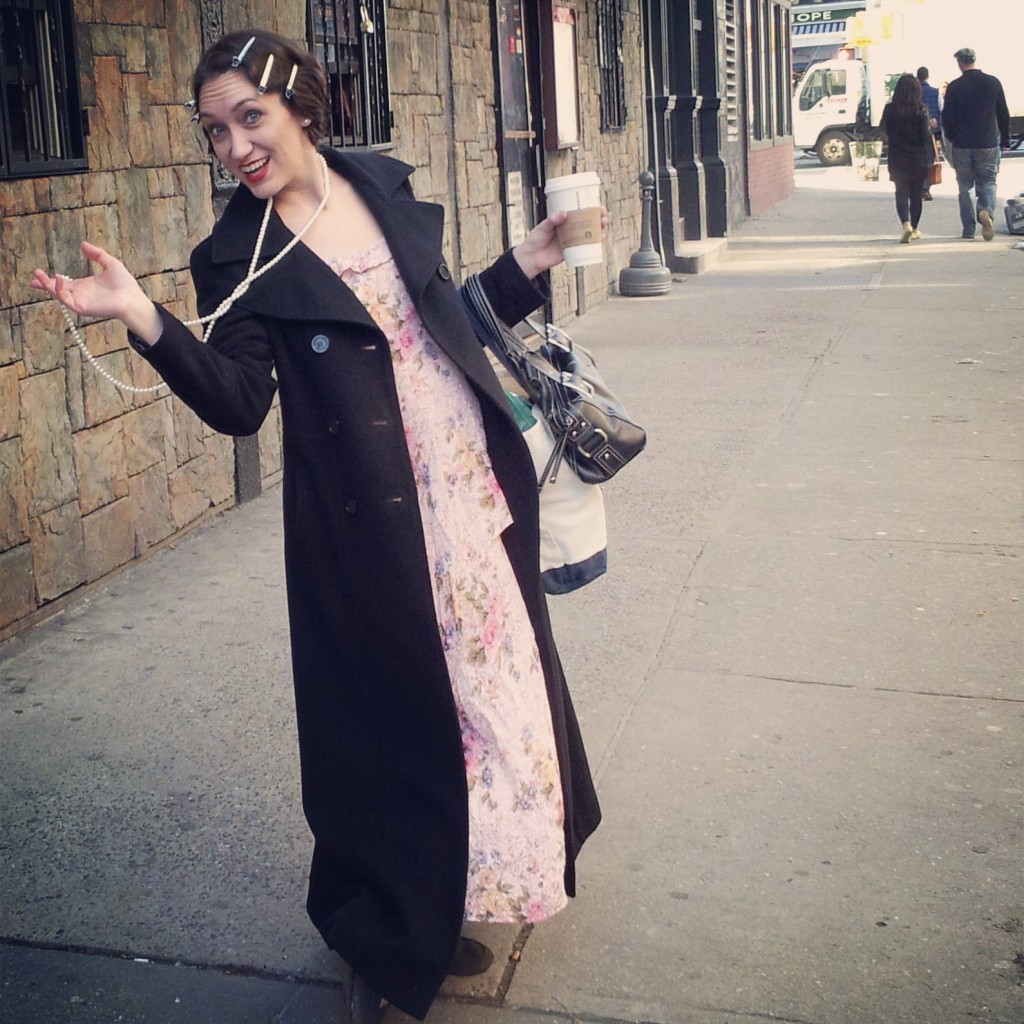 I may not have a clean house, or even sleep, but I can run through the East Village in hair and make-up and costume! And caffeine. Lots and lots of caffeine.

When we became parents, Roger and I vowed that we would somehow stay involved with our artistic interests. We would not give up. We’d be super cool parents, still out there and involved in the NYC arts scene-if it killed us, we’d stay out there.

Well…we’re trying. I’ll say that for us. Roger plays drums in a band, and I still perform with Dysfunctional Theatre. I’m also on the board as treasurer so it’s kind of hard to get rid of me 😉 Don’t think it isn’t a struggle though. It is. Both of us have come home from a rehearsal and declared, “I can’t do this anymore!”. We’re exhausted, and sometimes, honestly, you just feel like a jerk for taking so much time away from family for something that brings no source of income to the family. It feels…selfish.

Having no work outside of the home for now, my days are long and often tedious. There isn’t even a fifteen minute subway ride of a commute in which to drink a cup of coffee and daydream. I’m woken by the super sleep hater child pre-dawn most days and we’re off to the races. Our nights are full of fighting sleep so when the boy finally goes to bed…a break isn’t even a guarantee. My mind is mush.

Normally I’ll use the odd nap he takes here and there or a rare early bedtime as time to blog. This winter, I’ve been studying lines or taking a nap alongside the boy because I knew there was an evening rehearsal that night and I’d only had four hours of sleep. I drank a lot of double shot lattes after dark. The apartment isn’t as clean as it usually is, we’ve had a lot of take-out, and I’ve blogged once in the past two months.

It has been so worth it. It isn’t selfish to need an outlet, to have a need to create and perform.

During the last two weeks of rehearsals before opening the show, I doubted it. I vowed that this would be the last time I did a show. No more. I can’t learn these lines through osmosis. There are days when I have zero time to myself – why am I running out the door to go punish myself with this? I SHOULD BE SLEEPING.

Then opening night happens. People actually watch you, and they applaud at the end. And they mean it. They tell you how your show moved them, or made them laugh, and you remember why you love it, and why you’ll do it again. Wisely or stupidly, you’ll do it again.

I’m blessed to get to perform a lot with my very dearest friends on Earth. In 2003 I auditioned for them and who knew then that they’d become my second family? These would be the people who would sit in the waiting room while I labored to bring my son into the world. I’m so extraordinarily blessed sometimes. There are several moments in this piece where I get to stand back and watch my friends perform and I am so very proud of them. If you happen to be in New York and have the time and inclination, I would love it if you could come see this show.

It has been most definitely worth it. The house doesn’t need to be super clean, a few more pizza nights never hurt anyone, and heaven knows you all could just follow me on Twitter to know I’m not dead. Taking the time to do something like this show will always be worth it.

I could write a completely separate blog post telling you just what this show is about, but I’ll direct you instead to our website and some reviews (see links at bottom of this post). Short version: it’s about the poet, Edna St. Vincent Millay. Her poetry, her life, loves and losses.

I’d be remiss if I didn’t pause to give thanks to my husband for running home from work or his own rehearsals so that I could run out the door to mine. Thanks for your patience in having no date nights as they’ve been given over to this project. Thank you to my cast mates and friends who never once snapped at me for not being off book until the bitter end. And thank you to Jack who would shout out to me, “Have a good work, Mommy!” as I ran out the door with a quick hug and kiss.

This show has driven me insane this winter, yet saved my sanity and my soul in a very crucial way. It has been worth every moment.

“I Shall Forget You Presently” is currently running as part of the Frigid New York festival. We have three more shows as of this writing. February 28th, March 2nd and 6th. Reviews on Literary Manhattan (would you look at that picture of me!?!?) and Theater is Easy have been lovely.