Disclaimer: I received free products in order to host a Disney Side @Home Celebration through MomSelect and Disney Parks. However, the opinions expressed here are my own.

When I received word that I’d been selected to host a Disney Side @Home Celebration, I had this really amazing, fun idea that I was going to throw a grown-up party. Maybe not on the level of the all night celebrations I used to throw before having a kid, but gosh darnit I was going to have an adult party for once. Tasked with throwing a Disney Side party, I really, really, super-duper, really wanted to host a grown-up princess party. I mean my girlfriends and I once dressed as steampunk Disney princesses for Halloween? Would you look at these ladies? They deserve a party. 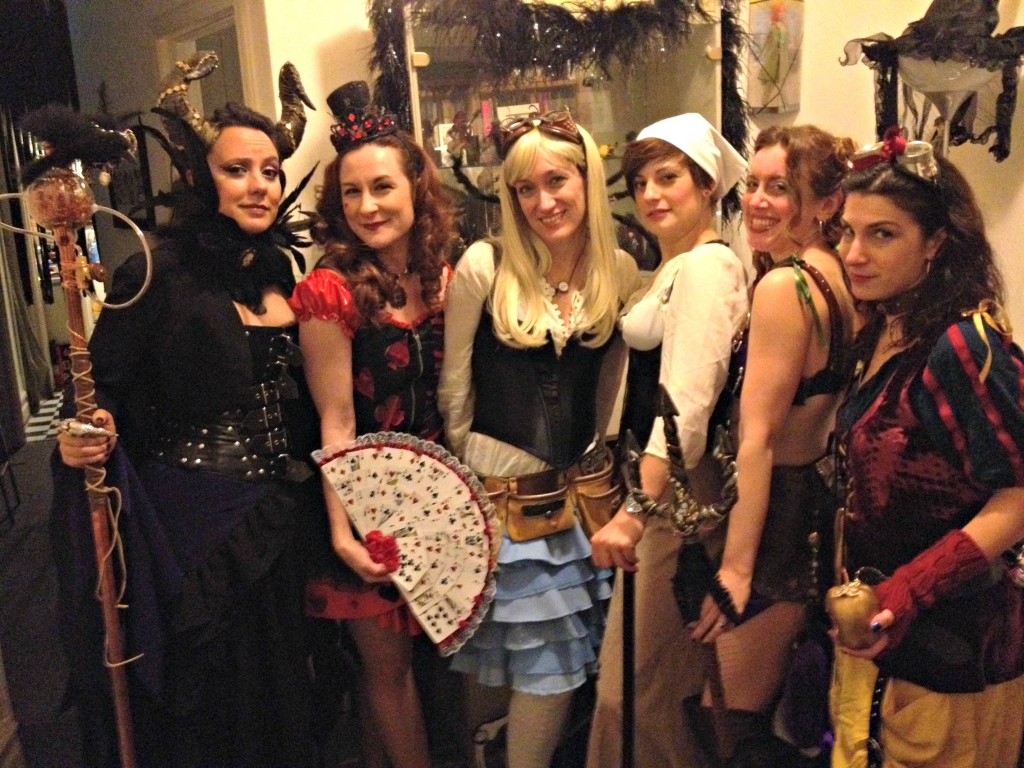 The universe felt otherwise. Scheduling proved impossible. We were coming down to the wire on this one and I was starting to have party panic. Then last Wednesday dawned frigid and snowy. Great, another day we’d be stuck inside. I checked my email while brewing coffee, and found another message saying that Saturday wouldn’t work for the girlfriend princess brunch, and then inspiration struck. Jack and I needed help getting through this week NOW – Princesses were just going to have to fend for themselves.

“Hey Jack, would you like to throw a party today?” Is there a 3-year-old on the planet who wouldn’t say yes? Jack ran to the kitchen shouting, “Let me get the Mickey plates, ok Mama?” While Jack started pulling out all the party items Disney had sent us out, I sent an email to every mom I could think of in our building. (with 30 floors, there are several…) The email was pretty basic: If you’re stuck inside too, Jack and I would love it if you would join us for an afternoon of Mickey Mouse cookie and cupcake decorating and play! With our emails sent we bundled up and went to the grocery store on the corner where I grabbed cake mix and cookie mix and some ready-made frosting. Last minute parties do not get baked from scratch goodies. Jack insisted we have juice boxes until I reminded him we had Mickey Mouse cups – at that point he lugged a giant jug of apple juice to our cart. I suppose apple juice IS the boxed wine of the preschool set if you think about it. 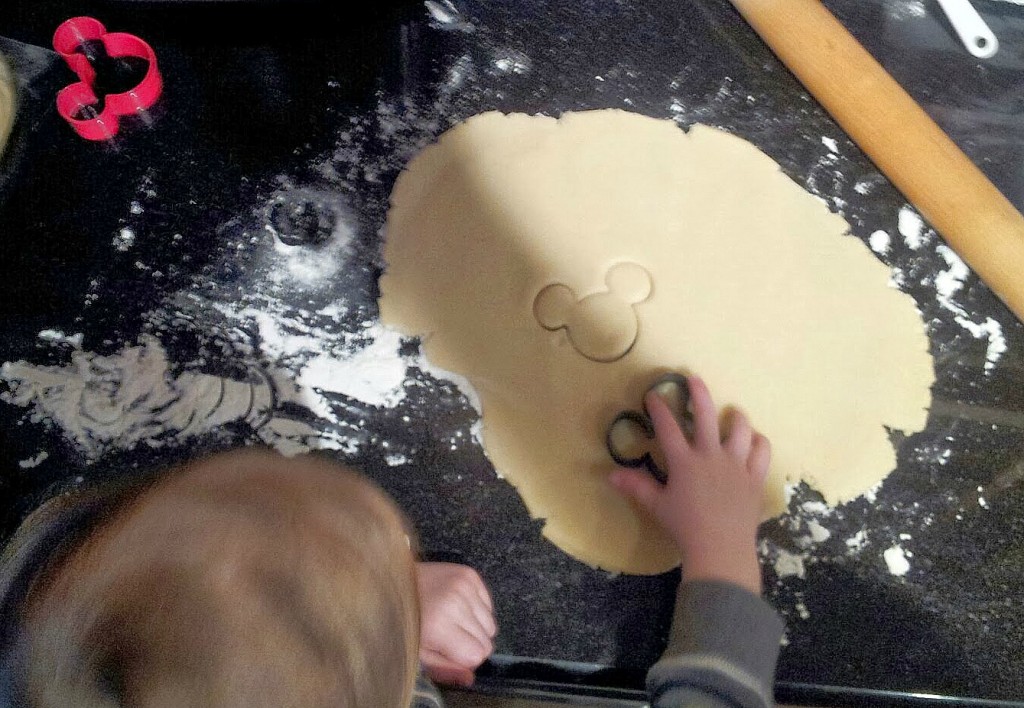 While baking, Jack starting reciting, “Meeska, Mooska, Mickey Mouse!” I didn’t even realize he knew that! Remind me to ask the babysitter what they watch when I’m not around…  I love that he also suggested we have all his friends watch Mickey Mouse and sing the “clubhouse song”. He’s a party planner! After baking, we decorated. Jack insisted that the balloons had to hang from the ceiling. He held the tape dispenser and I just followed directions. Before I knew it he was asking for a nap. Party prep is exhausting, don’t you know? 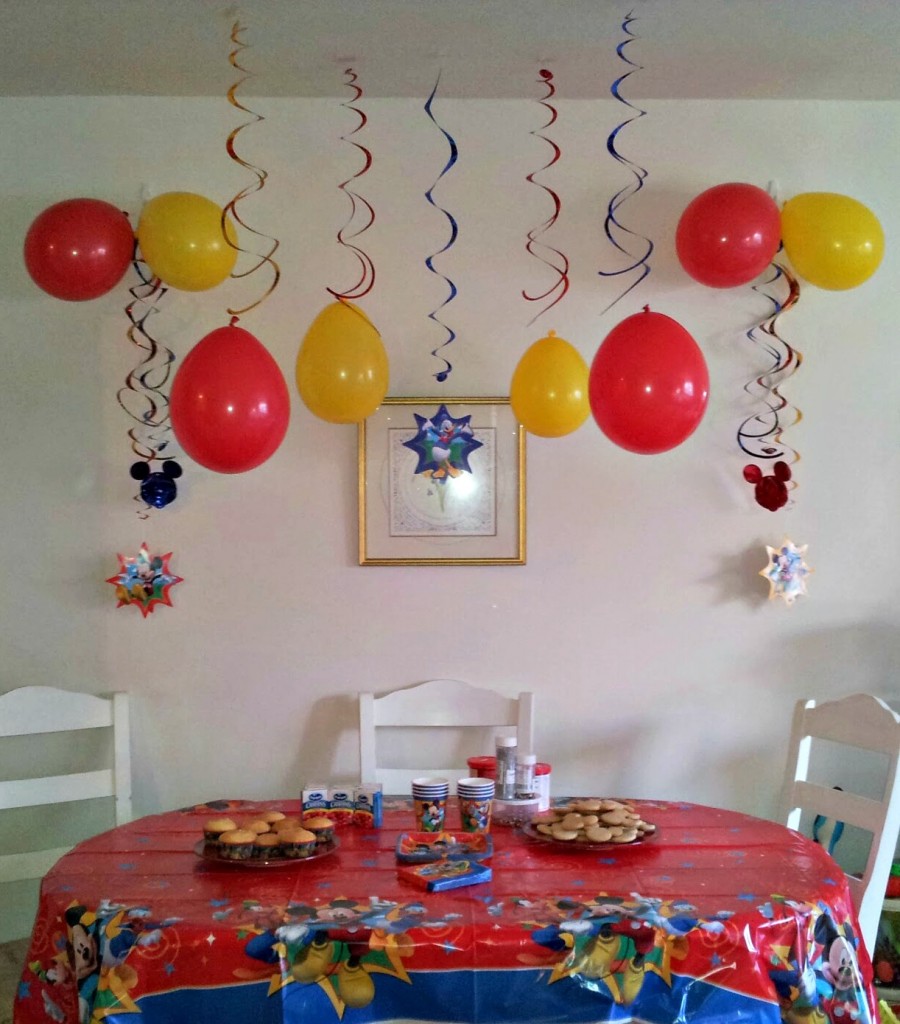 When our friends arrived after nap time, one had brought her Minnie Mouse dolls so Jack had to run and get his Mickeys. We had an unplanned Mickey parade. Brilliant!

Cookie decorating was a hit. I gave each child a little dish of frosting and set our various colors of sprinklers. Sugar was everywhere. 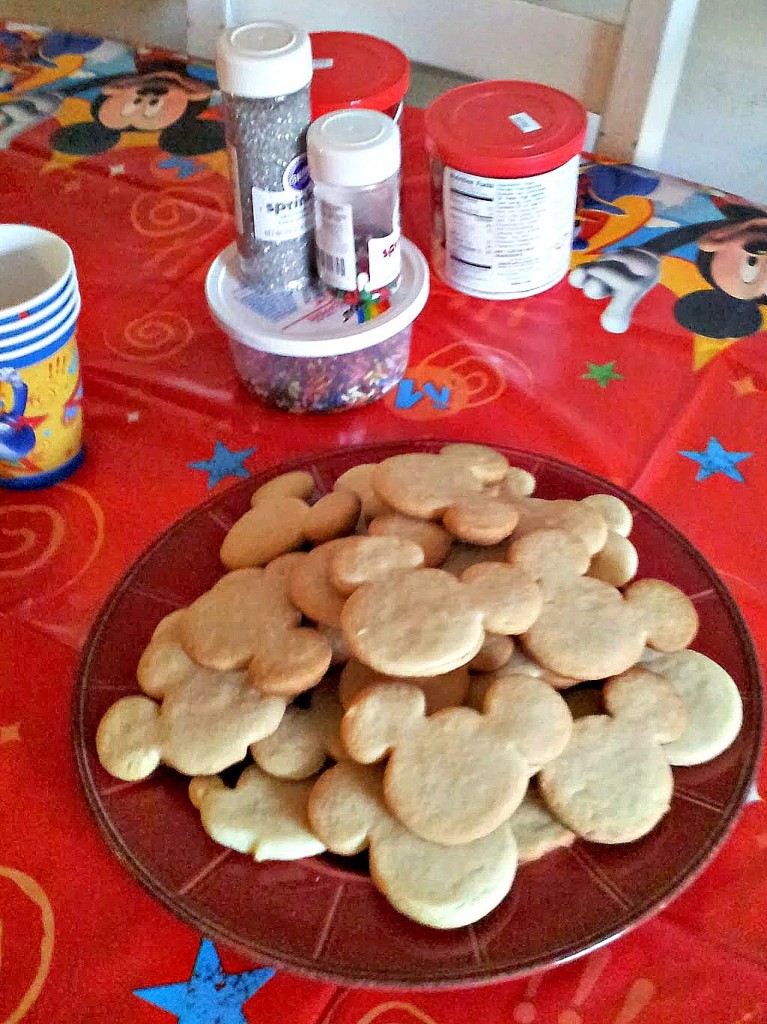 Thanks to the party kit we’d been sent I even had some fun gifts to surprise the parents with. Really, that was just the icing on the cake…or cupcakes as it were. Everyone was just happy to have a fun surprise get together to get us through yet another snowy day. I HIGHLY recommend surprising some kids in your life with an impromptu party at least once in your life. A party for no reason other than to just have fun.

Let’s recap. I baked cookies with my kid. We played “party decoration” and used up half a roll of tape (any child’s favorite game). Then we had friends over to run wild singing about Mickey Mouse while downing excessive amounts of sugar (all while practicing the fine motor skills involved in frosting cookies – HELLO, EDUCATIONAL VALUE!!!). Mom of the week, right here.

Thanks Disney for providing us the opportunity to be heroes for the day. If you’d like to show your Disney Side too, visit www.disneysidecelebrations.com for plenty of inspiration, activities and recipes!

Disclaimer: I received free products in order to host a Disney Side @Home Celebration through MomSelect and Disney Parks. However, the opinions expressed here are my own.