There are aspects of my child’s play that fascinate me. Let’s be clear though, I’m not talking about obsessing over my special snowflake’s awesome imagination or anything like that, (because frankly he has zero imagination sometimes. I’ll tell him his ball says hello and he looks at me like I’m a total moron and says, “balls don’t have mouths, mommy” I mean…) I’m talking about the unique ways a child of the city plays. The things that fascinate him. You should hear his rendition of “Old MacDonald Had a Farm”… “And on his farm there was a BACKYARD!”

Before you get all riled up and think we need to move to the suburbs so the child can have a freaking backyard let me tell you what I told him. Backyards don’t have tons of other kids just showing up to play, ok? The playground is where it’s at, dude. Instant friends. Then we took a walk to the playground that is one block away and played with a bunch of random kids we’d never met and scored the digits of a new mommy friend who has the cutest daughters. I mean, she was even talking prearranged marriage for the kids at one point!  Wait a minute…  Hmm… backyards… 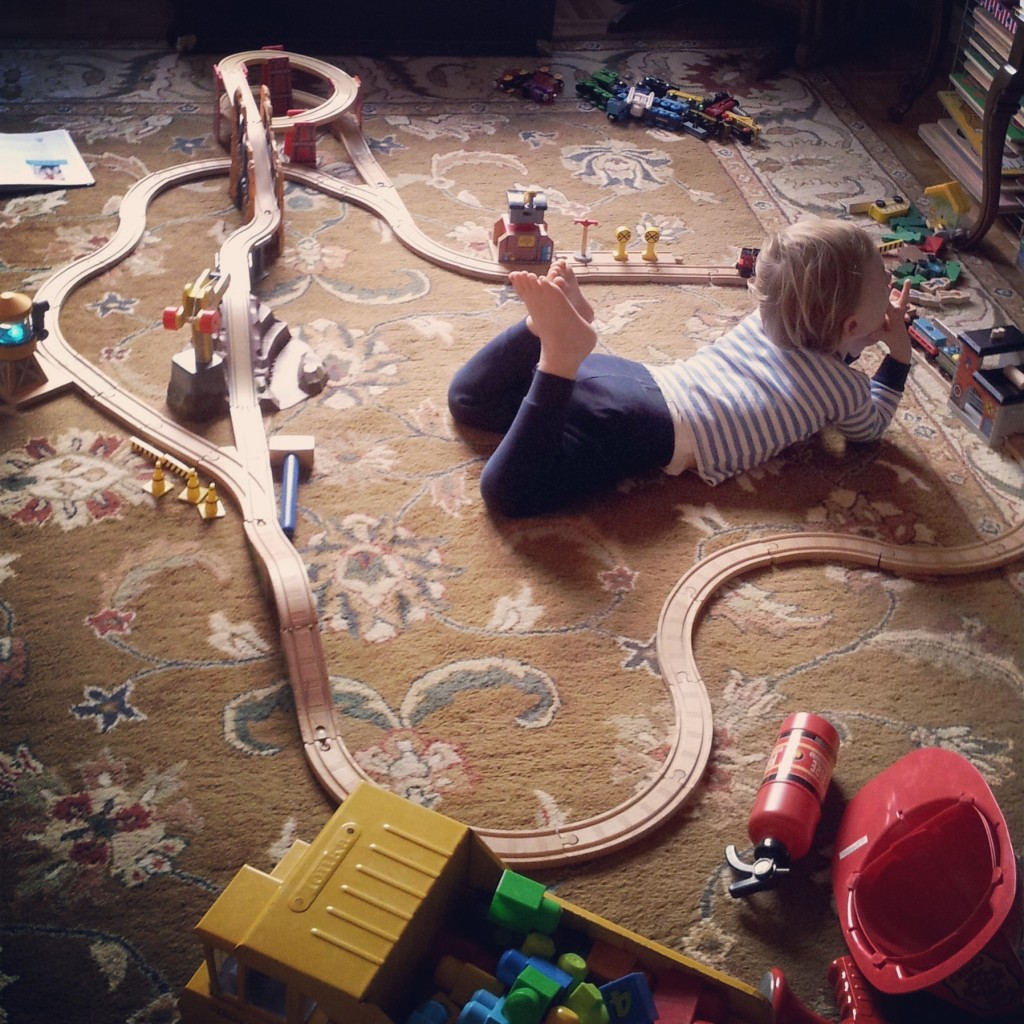 Trains, planes, and all things on wheels tend to captivate all little boys. I well remember my nephew at this phase, that child could tell you the name of any dirt digging vehicle and would happily correct you if you dared to just call it a generic I dunno…construction truck? Jack’s heavy into trains still and thanks to the wonders of Craigslist and loving relatives he has a Thomas collection worthy of a prince. He’s kind of tossed the cartoon out the window though and has assigned them all a subway line. At the transit museum he made Roger buy him a “Connecticut Choo-Choo” (Metro North Commuter line…duh.) and it has possibly surpassed Thomas as most loved train.

He enjoys pulling out a subway map when we set up the train sets so he can plan out where he’s going to go.

Or not go as it turns out.

This past weekend was a doozy if you wanted to go anywhere via subway here in NYC. I had to take three separate trains to get to a rehearsal – it took me an hour and a half to accomplish the trip. ONE WAY. On Saturday I had to bring Jack downtown to drop him off with Roger as he finished his rehearsal and I departed for mine. We met in Soho for the handoff and departed for our various miserable subway rides. Jack and Roger apparently got so fed up they just ended up leaving the system and hailing a cab. I stuck it out to Brooklyn and will probably never be asked by this theater company to work again as I was almost 30 minutes late.

Jack was apparently paying attention to the whole thing. Monday morning he busied himself with the business of setting up train lines. I made a cup of coffee and sat down on the sofa to watch him while reading through some emails. I noticed that none of the trains were moving. He was lying on the floor with three trains lined up in the station. I went about my business and then I heard him:

The MTA suspended train play in Manhattan on Monday.