I’d never really pegged Jack as one of those kids who would become animal obsessed. His first trip to the zoo ended in tears because a cow mooed at him. Despite that and a fear of tropical bird houses …  Jack recently became completely obsessed with this Horse Set. He visited this set every time we went to our local toy store and begged for it each time. I must have said it was too expensive a million times because soon they were dubbed “the expensive horsies”! In a moment of weakness I promised him the horses if certain conditions were met. It took him a couple of weeks, but sure enough I eventually had to buy the expensive horsies.

After several days of watching Jack serve them birthday cakes, give them baths, take them to the horsie doctor, and begging to sleep with them (stable and all) Roger suggested we take him to Belmont Park to see real horses race. Now mind you, Roger’s been suggesting we take Jack to Belmont every spring and summer since he was born. Every time I would say, “Roger, I am not taking my child to a race track” to which he would reply, “But honey, there’s a playground and picnicking…it’s FAMILY FRIENDLY”.

Stop trying to pull one over on me, Roger, I’m not taking my child to a race track.

Well, dear readers, I caved. I took my child to a race track, and it was kind of awesome. 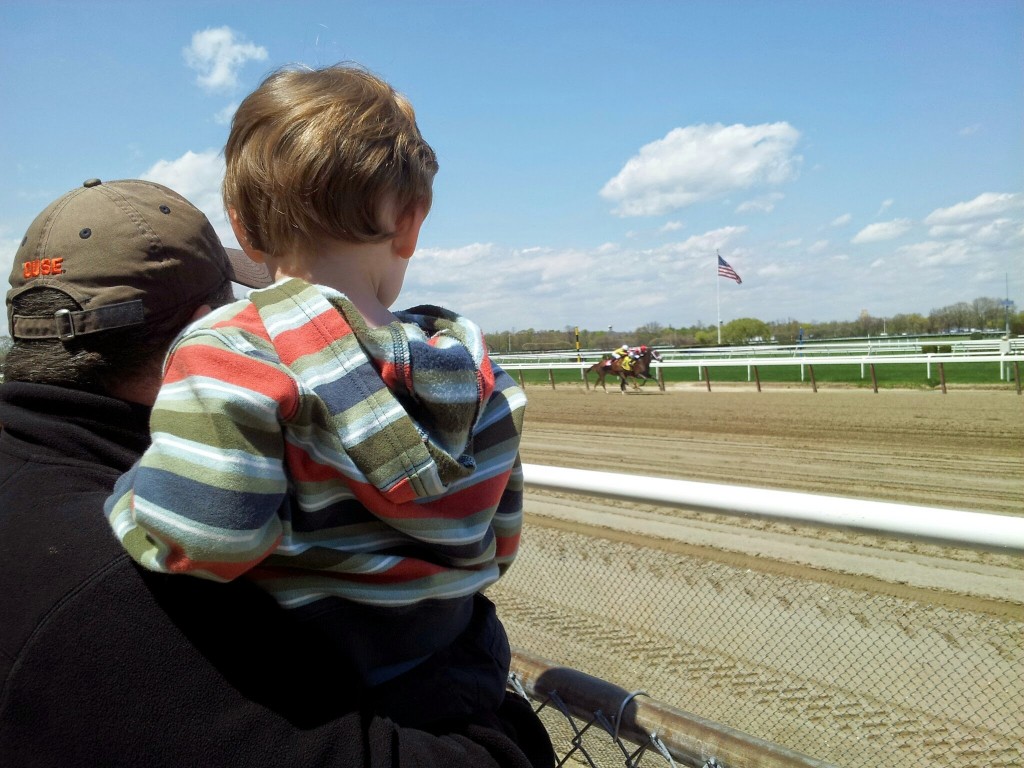 No joke, it was so awesome that when we got home I went to their website to hopefully read more of the history of Belmont Park only to discover that we really should have gone on a Sunday! Sundays are Family Fun Days with a variety of activities scheduled. I love the sound of Breakfast at Belmont too and plan to take Jack back. You can watch the horses training in the morning then take a “free tram ride (weather permitting) through the stable area, enjoy a free Paddock Show and participate in a free Starting Gate demonstration”. Jack would flip at seeing the starting gate up close. That was his one disappointment with the day – the starting gate is too far away to see.

Belmont Park opened in 1905, and according to their site it was built to model the great race courses of Europe. Standing in the backyard under blue skies, looking up at the vine-covered building, I could almost feel the history. I wonder what it was like back then? 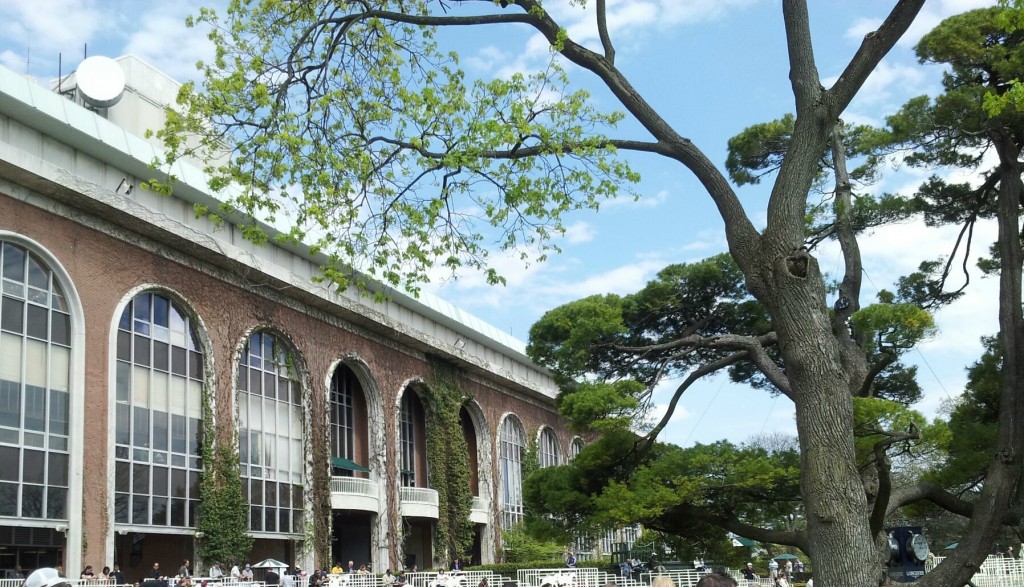 Roger told the story of Secretariat to Jack and we showed him the famous picture of him winning by 31 lengths. They have a copy of it blown up giant, wall size copy of it hanging inside the grandstand. I’m a crappy blogger because I totally should have posed my child in front of it to demonstrate how we made the day a history lesson!

Jack loved watching the horses race. We let him pick his favorite horse before each race so we’d know who to scream for. No surprise there…Jack LOVED the yelling bit. He even had a better record than his parents and his choices won two races.

Did we take him up to the window and let him place the bet? Or even watch it being done? No! Use some common sense folks. It IS a race track – gambling is going down. I can’t pretty up that aspect for you and I know that for some families that would just never fly. My family is okay with $3 bets though. If I’m remembering correctly you could bet as little as 50 cents so you could really be cheap if you wanted! I let Roger handle the money transactions while I took Jack past the duck pond (he wanted to pet them all) and to the playground. There’s a very large, modern playground in the “backyard” with equipment for toddlers and also bigger kids. I think they kept the little rocking horses for nostalgia purposes. 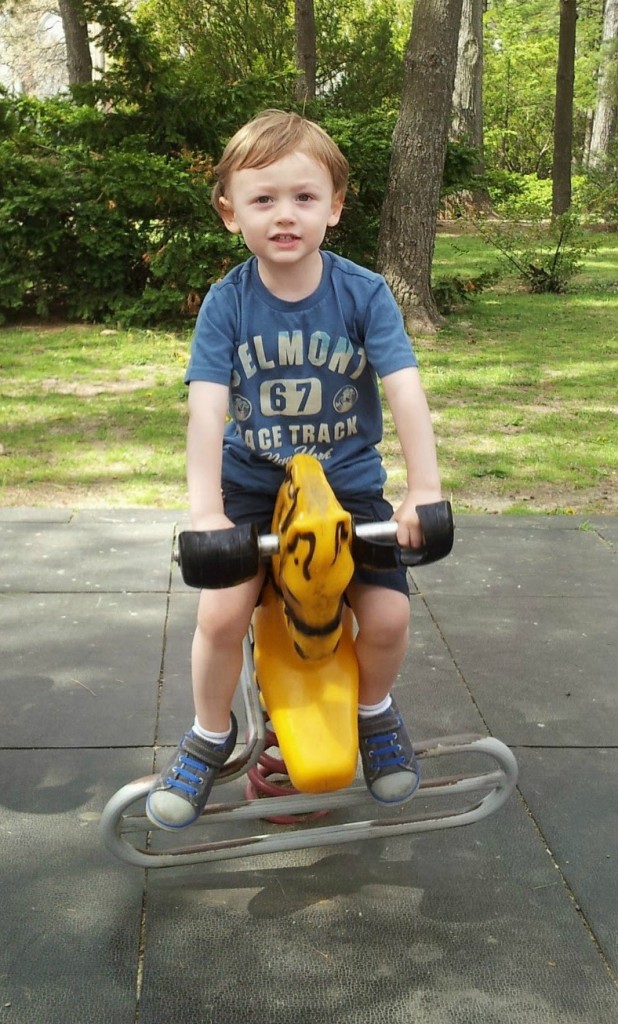 Watching the horses walk around the paddock area was another highlight. We had to patiently keep explaining that the horses were working and no we couldn’t go in and say hi. He didn’t really mind though and one of the employees later took the time to talk to a bunch of kids and let them pet his horse (NOT one of the race horses). Jack was in heaven. 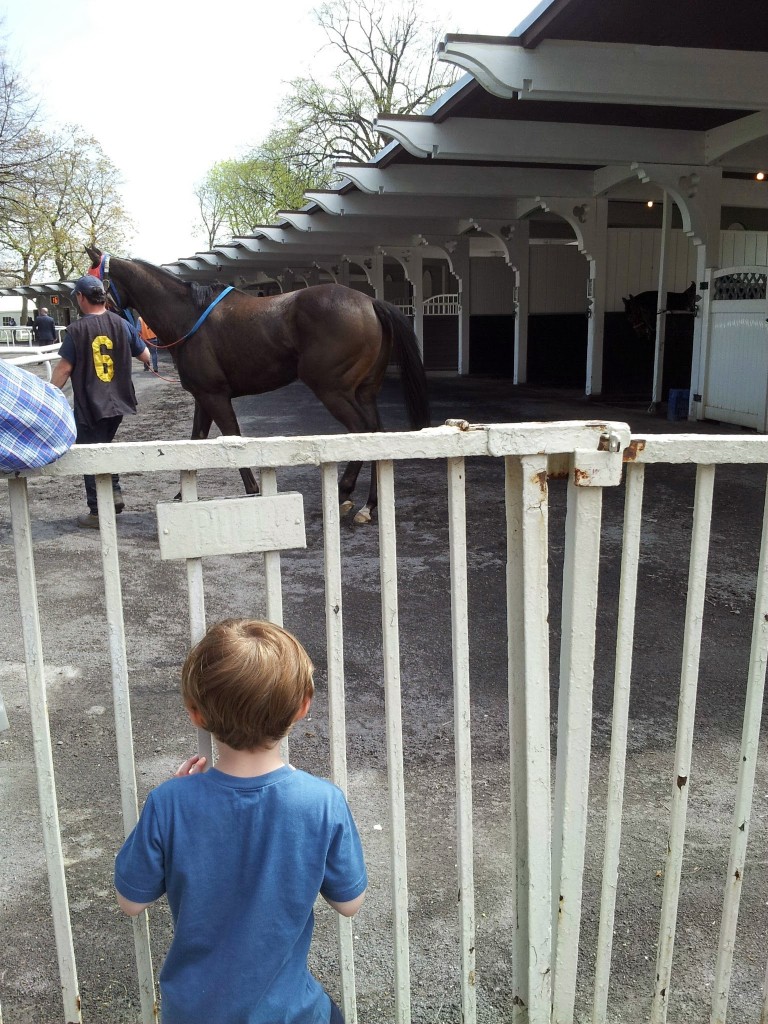 I’ll admit it, I was wrong about this one. A day at Belmont Park is a perfectly acceptable family outing. We saw tons of families out for the day. Babies, toddlers, older kids, moms, dads, grandparents. Every age was present. Long Island Rail Road took us almost right up to the grandstand. They only thing I’ll do differently next time is pack a picnic to bring. You can bring your own food!

Is there something you swore you wouldn’t do with your kids and then later came around to?