It’s 10:30 on Thursday night and I’m sitting out in the living room with the world’s worst glass of wine. (icing on the cake today this horrible wine…) Jack is coughing again. Will it wake him up this time? Can I rub his back and give his forehead a kiss and easily send him back to sleep or will this require a bathroom trip, crackers, water, and a full discussion on the merits of race cars vs. rocket ships? 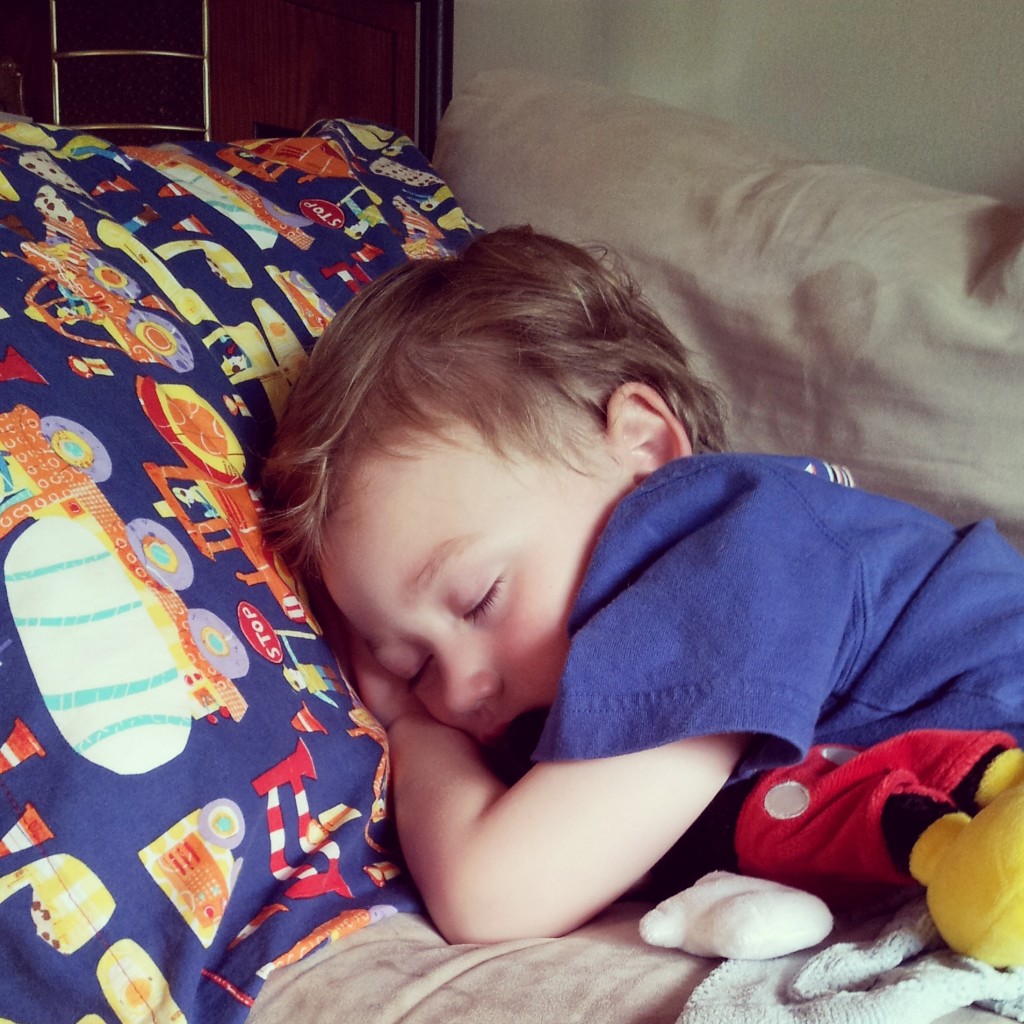 The ONE nap he deigned to take all week…

Jack’s slight fever, runny nose, and crankiness of early last week blossomed into a full on nightmare of a cold Sunday night. I thought we were in the clear-fever free for days, nose was drying up! Alas, it was not to be. His temperature was 103.2 at 2:00 a.m. I could feel my week going down in flames. Monday I was supposed to be collecting on my Mother’s Day wish by spending the day at a spa with two of my best girlfriends, instead I cancelled the babysitter and was sitting in the pediatrician’s office by early afternoon. We collected our diagnosis of ear infections (both sides! hooray!) and an antibiotic that would take forever to work. Jack is crazy town allergic to penicillin (Google “serum sickness like reaction” sometime, it was FUN) and nothing works like penicillin on a kiddo’s ear infection. Oh penicillin, how I miss you…

“He should feel better on oh…Thursday” she said. Thursday.

I put the dress I need to photograph for review back in the closet. I have a queue of roughly 200 emails that need an answer, but despite feeling like crap Jack doesn’t want to nap. He just wants endless cartoons and cuddles on the sofa. Email answering is not on the agenda. I’d sneak out to Starbucks, but Roger has barely been home. He had a full day shooting for a new installment of his special series. When you get a text that says, “In the Rockaways. Our boat is late.” You just kind of give up on the day. “We’ll be ordering in for dinner” I answered. The 9/11 memorial opened and he had to be down there twice – kind of a big story, you know. He had band rehearsal twice. An event to DJ out in Brooklyn tonight. I’m pouring another glass of wine and trying to remain chill.

For a glass of wine after bedtime, I am grateful.

I am grateful for Cars on DVD, and also Planes even though it kinda sucks. Peg + Cat on PBS? You rock. Those Mighty Machines DVD’s that are nothing but an hour and a half of fire trucks? Awesome.

The Fresh Beat Band? I refuse to link to you. That hour and half we had to spend together on Tuesday? I want those minutes back!!!

Giant snuggly, sherpa fleece blankets that are big enough for mama and boy? You got my back.

That last Dan Brown novel even though it is total crap. I can read you while sitting on the sofa with the sick boy and still totally pay attention to everything going on in Cars/Planes/Peg/Whatever, fetch drinks, stuffed lovies, and soothe fevered brows because it is an awful page turner that reads just like the other Dan Brown books. It’s cool, I just need a wee tiny distraction.

And SHOUT OUT to the New York Public Library for having such an awesome app. Search for ebook, check ebook out, and be reading it on your device in mere minutes. Phew. Sanity saved.

Melissa & Doug Lacing Beads. You provide such a lovely quiet activity. No seriously, these things are awesome. I feel so virtuous and educational when we play with them. Then there’s our new Melissa & Doug Space Shuttle Puzzle. I ordered this on Sunday and it came on Monday (thank you Amazon!) and it is our new best puzzle friend. We have probably put it together about a hundred times so far. Easily. It even inspired us to pull out our favorite Guide to the Solar System for a chat about the planets and asteroid belts and comets for a good hour on Tuesday. Roger came home and Jack delighted in telling him “Comets are like gross snowy ICE BALLS”. 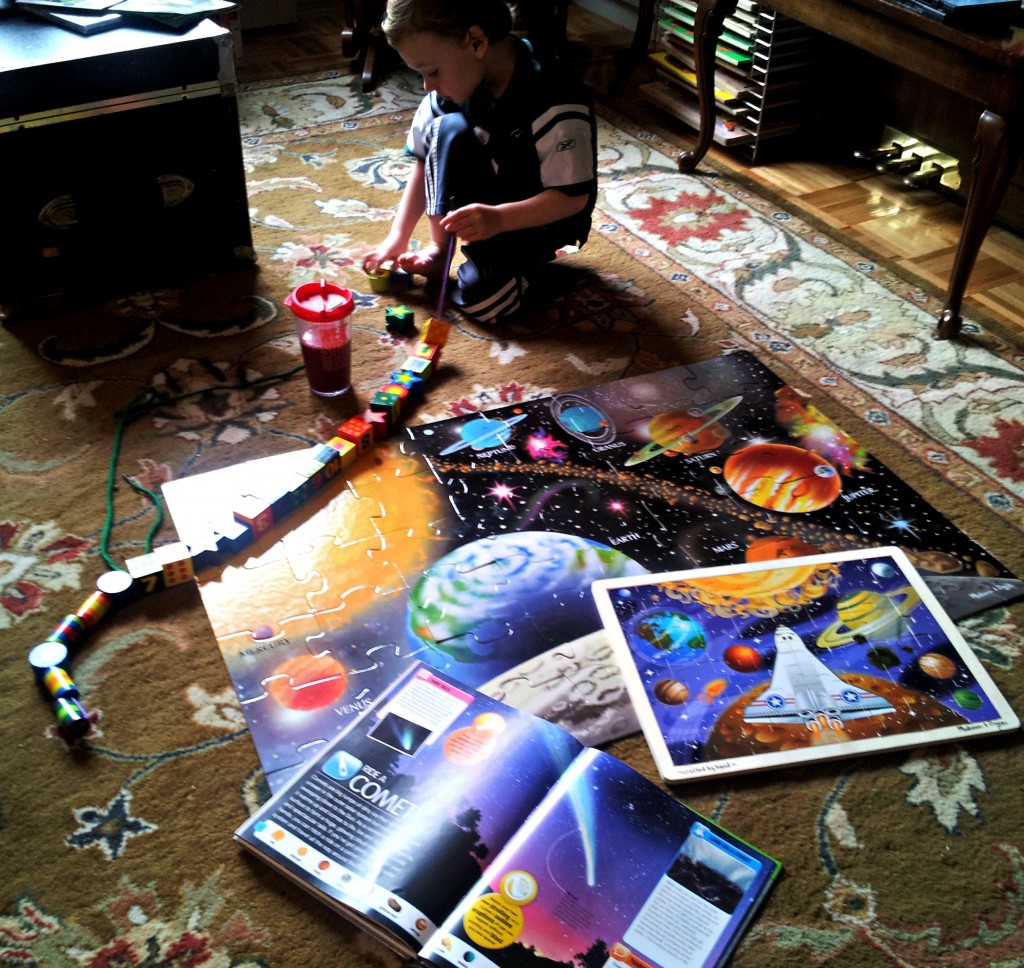 So the week hasn’t been a total bust, just long. Oh so long. (with a lot of laundry – I guess being sick makes recent potty training null and void?) And there’s still Friday to go. Sunday holds the promise of a trip out to the Rockaways for us all so please, please crappy antibiotics that are not penicillin…please hurry up and heal my boy!

This post contains a lot of affiliate links. Cut me some slack, it was a long week – let me try to make 10 cents here!