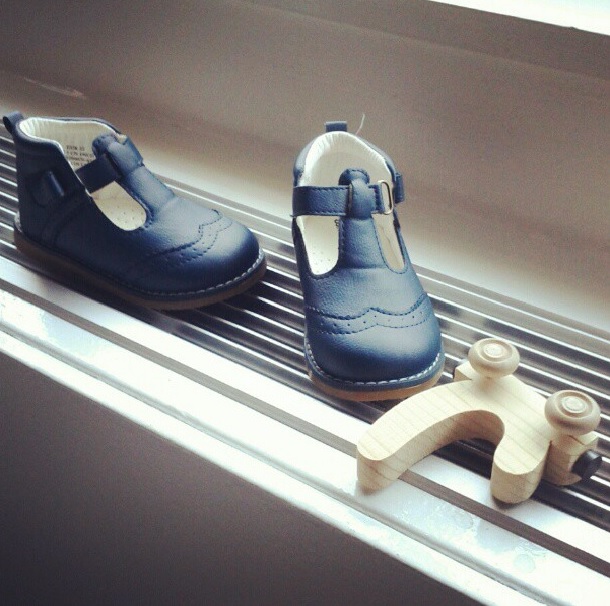 Another month, another growth spurt and Jack needs new shoes. As he and Roger headed out today on a quest for new practice baseballs I asked if they could stop in the shoe department of the sporting goods store and see what was on offer for sneakers. My only directive was, “nothing too ugly, ok? Please?” I should have been more specific.

An hour later I’m in the grocery store and my phone rings. It’s Roger:

“They have some shoes in his size and he really likes them. The only thing is they’re black.”

“They’re black? What do you mean…like all black?”

“All black with a red sole – he says they’re cool”

“Tell him they don’t come in his size and leave the store.”

And then I hung up on him. I hung up because I know those shoes. We saw those shoes two months ago when we bought the newly outgrown, but otherwise perfectly fine sneakers (RIP my $40). Those red and black shoes look something a professional basketball player who makes several million a season would wear. My son is three years old. So far he hasn’t made a penny. Well, once his aunt gave him a dollar, but he refused to share it with me and frankly if you aren’t making several million a year or otherwise contributing to this household’s bottom line…I GET TO PICK WHAT SHOES YOU WEAR.

I understand the love of shoes. I really do. I would love to own a pair of Louboutins. I’m pretty sure those red-soled wonders would make me the sexiest woman on Earth. Likewise Jack is convinced those red-soled, shiny black sneakers at the sports store would make him “super fast and sporty”. I know this because the far humbler sneakers we settled on two months ago are what he chooses every morning, “I’m going to wear my sporty shoes – they’ll make me super fast.”

Those shoes? They probably won’t make you super fast, but you don’t have to know that yet. There is time ahead to learn that lesson. Right now though, I’m begging you to give me a few more years of basic looking sneakers. Childlike sneakers. You’ve already nixed overalls. No more sweet little rompers with embroidery on them. Those are for babies I hear. You’re three and half and already I’ve lost the battle over most articles of clothing. T-shirts with race cars, sports themes, rocket ships, and the occasional fire truck are all you will deign to wear. This Spring I gave in and cut off your curls. You look so much older with your close-cropped hair and sporty outfits, and still I’m proud of that. You’re growing up and it makes me happy – no posting of #dontgrowup on my Instagram photos. I’ve been waiting for so long to watch a child of my own grow up that it would be silly to protest it. This is what mothers do after all. We love you and cuddle you and then watch you grow up and away.

Give me just a little more time with this one thing. No grown-up looking shoes please? We can fight over the latest sneaker and its exorbitant cost later. Maybe when you’re 10? I don’t know, 8? Just not at three and a half, ok? My apologies to you and your slightly confused father, but I just can’t deal with those red-soled sneakers right now. You’re still my baby, my little boy. Let me have this one tiny victory.