If you’re the parent of a preschooler, odds are you know Paw Patrol. Or you live under a rock. Or somehow magically held fast to that vow of “no TV ever” far better than the rest of us. Paw Patrol is THE top rated series for preschoolers right now. My son and his friends are serious fans of these little pups. So when the opportunity to work with Spin Master Toys on a review of one of their new Paw Patrol Toys came – I said OH YES!!!

For those who don’t know, the show is about a boy named Ryder and his six rescue dogs (I LOVE that the puppies are rescue animals – just like our cat!). They work together on various rescue missions in their community of Adventure Bay. My husband and I may joke that their response time is seriously slow due to Ryder’s penchant for slide show presentations on the rescue plans, but the show has given us many opportunities to discuss animals, the environment, and what being a good friend means. We can’t find anything wrong with the show and when Jack started begging last fall for a “Marshall of his own” we were dismayed to find out that there were no toys being produced. ARE THEY CRAZY??? Puppies, fire trucks, construction vehicles…and no tie-in toys?  I thought this was America!!!

Thankfully Spin Master Toys came to the rescue and released Paw Patrol toys this summer! After I met them at Blogger Bash this summer, Spin Master graciously sent Jack a Real Talking Marshall, and honestly I’m not sure how Santa is going to top that. I mean, look at this guy!

Marshall has been Jack’s favorite pup since the show started last Fall. Immediately after opening the box, Jack hugged Marshall and literally lay down on the floor to cuddle with him. Jack kept whispering something and I had to eavesdrop… what the heck was he saying to the dog? “I love you, Marshall” over and over.

Oh geez. I could have died from the cute. Tried to get a picture, but the joy was so intense he couldn’t stay still. Please excuse the blurry.

Overall the Real Talking Marshall is super adorable and snugly. We have a bedtime routine for him in which we turn the switch off on his voice box because no one needs to be woken up by “I’m FIRED UP!”…as cute as that may be. Thank you Spin Master for giving us the option of peaceful nights.

My experience with the toy Paw Patrol toys we own has been positive – they’ve extended Jack’s imaginative play from the show. I will hear him singing the theme song to himself and acting out a rescue with Marshall and a small Rubble he also has. I’m sure we will be welcoming more friends from the show into our home – we love the themes of friendship, helping others, and environmental concern. And we’re VERY relieved that if Santa is asked for a Paw Patrol toy this year, he can deliver. Phew! 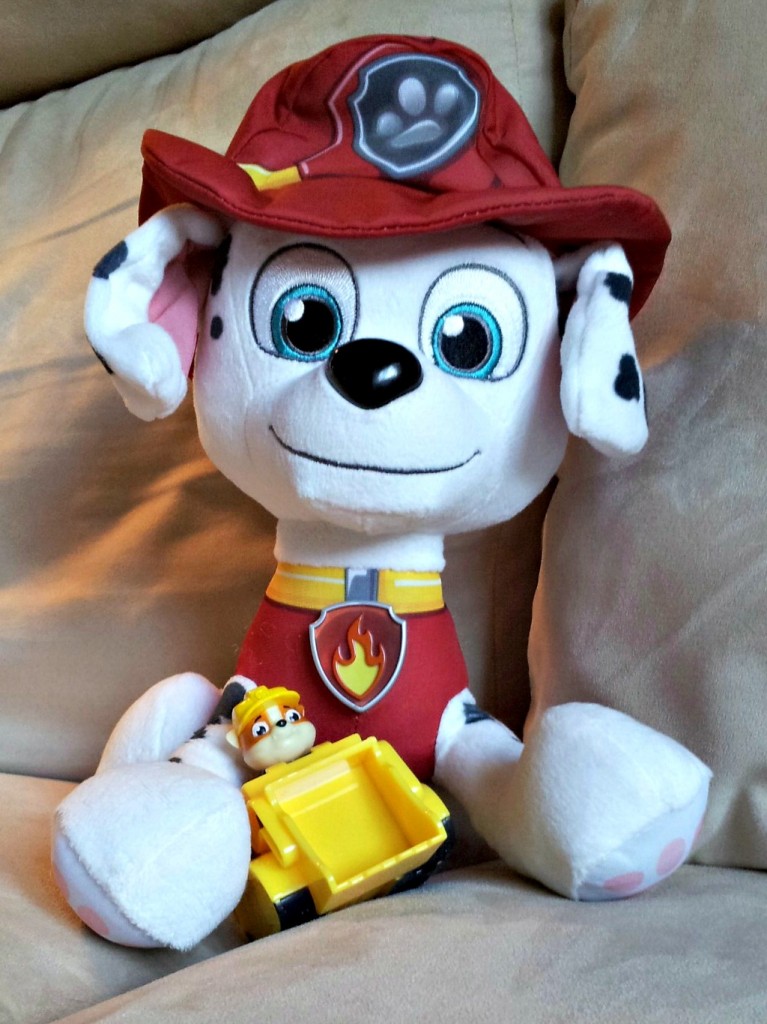 Given that this will be the first holiday season there are Paw Patrol toys available, I predict they’ll be a hot holiday item. Jack has a friend whose grandparents have been helping him collect the whole gang and when his mom saw on my Instagram feed that I met the Spin Master folks at Blogger Bash back in July she begged me to ask how they could find Skye. I think it’s fair to say that the preschool set is obsessed with the Paw Patrol puppies! In our house we currently have a Rubble Racer, Marshall (as you know) and a dvd of the show – almost daily I’m asked if we can get Chase, Rocky…how about Skye?

Are your kids Paw Patrol fanatics too? Are you holding out for Santa’s arrival or have you caved already?!