Can the world handle another pumpkin decor post? I’m not sure I need to enter the Pinterest fray of decorated craft pumpkins, but look at what happened last night!!! 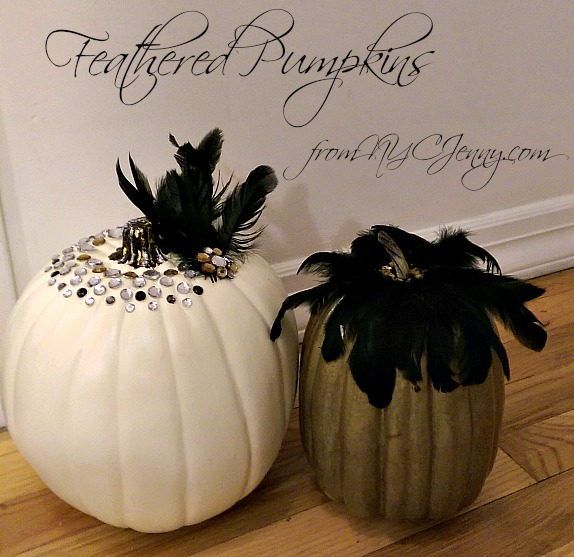 These pumpkins are destined to be wedding decor at the marriage of two very dear friends of mine. They are getting married the Sunday before Halloween, and being the fun couple that they are, the wedding has a bit of a Halloween theme. I plan on taking far too many pictures at the actual event because oh my, there is so much sparkly goodness going on. The bride is making each of the bridesmaids a custom sparkly, feathered fascinator* to wear and that is the least of it! She’s got a serious DIY thing going on for this wedding and when we heard the plans, my group of theater ladies volunteered our glue guns and time to get this done.

Last night we showed up armed with wine and snacks to settle in for a night of crafting. The bride had spray painted some of the collected pumpkins gold and others were already white, and with this as the base she laid out black feathers and a giant box of rhinestones and told us to go crazy. There were no diagrams, no printed out Pinterest images just rampant creativity. After seeing the bridesmaid fascinators I thought that at least one of the pumpkins ought to have a tiny little fascinator too and that was the idea I went for with the large white pumpkin above. Another of the ladies took a gold pumpkin and went feather crazy making a little fluffy collar for it. I LOVE IT SO MUCH.

When I posted them on Instagram last night you guys showed your love too, so I decided to put these fancy pumpkins in the spotlight and do a quick blog post/how-to. 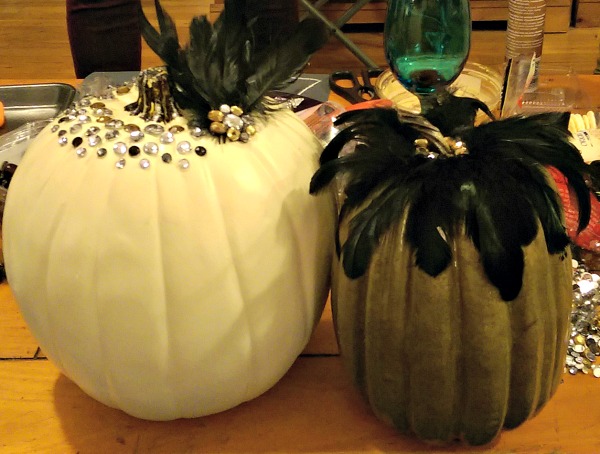 All you need are pumpkins (real or craft), feathers, rhinestones, and a glue of some sort. We found hot glue to be easiest with the feathers. Michael’s has tons of these white craft pumpkins on sale right now. The gold pumpkin was originally an orange craft pumpkin found at our local drugstore of all places for just a few dollars. Gold spray paint was a quick and easy way to transform it. Michael’s also has bags of feathers in basically any color you could want. The bride bought a giant box of multi-sized rhinestones in coordinating hues. She found it in the bead section of Michael’s as well.

I started my white pumpkin by making a circle around the stem with large rhinestones and left a small gap where I wanted the “fascinator” to go. I glued a group of feathers (add one or two feathers at a time to build up to the look you want) to that gap and then covered up the glue and base of the feathers with more rhinestones. I then just kept adding rows of rhinestones around the pumpkin under that initial row until I felt it was enough.

The gold pumpkin was created by one the bridesmaids. She started it by simply circling the pumpkin’s stem with some hot glue and layering on feathers until it was fluffy enough for her liking. More hot glue and rhinestones covered up the rough edges by the stem and made it sparkle.

That’s really all there is to it. A super high-glam look for your pumpkins all inspired by those gorgeous bridesmaid fascinators (which I promise to fully document at the wedding!). Grab a pumpkin and your glue gun, get some feathers and rhinestones, and don’t forget that glass of wine. Very important while crafting with your best girlfriends. 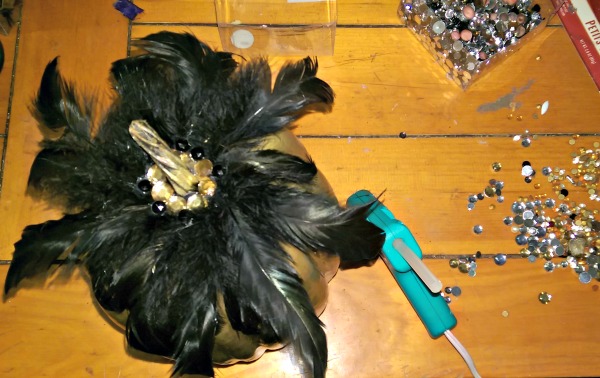 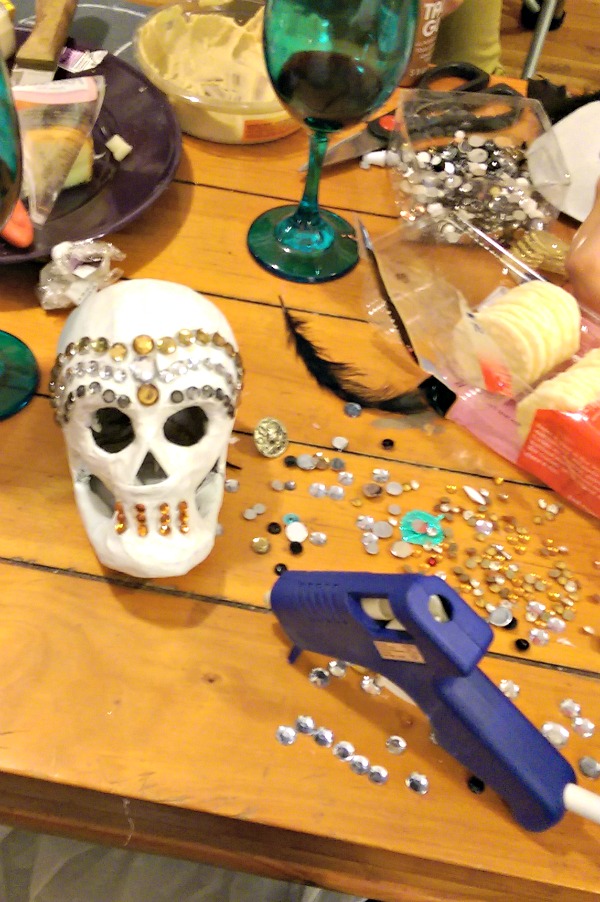 I can’t wait for this wedding. Two of my favorite people are getting married and it’s going to be so much fun!

*A fascinator is a headpiece, a style of millinery… In the modern usage, it refers to a woman’s alternative to hat for formal attire; it is usually a large hair decoration on a band or clip with elaborate trimmings and decoration like a formal hat and it can incorporate a base to make it a miniature hat. (from Wikipedia)