We are HUGE fans of Uncle Milton around here. If you’ve never seen their “In My Room” line, you’re missing out! For his third birthday Jack requested their “Moon in My Room” after having seen it at Barnes & Noble. It instantly became a key part of our bedtime routine. It’s an incredibly detailed model of the moon that lets you choose which cycle of the moon you want on. He always wants a full moon while I try to bargain down to more sedate crescent moon… He always wins. Earth in My Room joined us a couple of months later and honestly I’d put the whole solar system in his room if I could figure out how to hang it in our rental apartment!

When I saw the latest offering from Uncle Milton this summer at an event, I literally spilled a glass of wine on their poor PR rep in my excitement. It’s called Big Red Rocket, and you guys, IT’S A LIGHT UP ROCKET SHIP!!! Bless their hearts, the Uncle Milton folks forgave me for the wine incident and sent over a rocket for us to review. 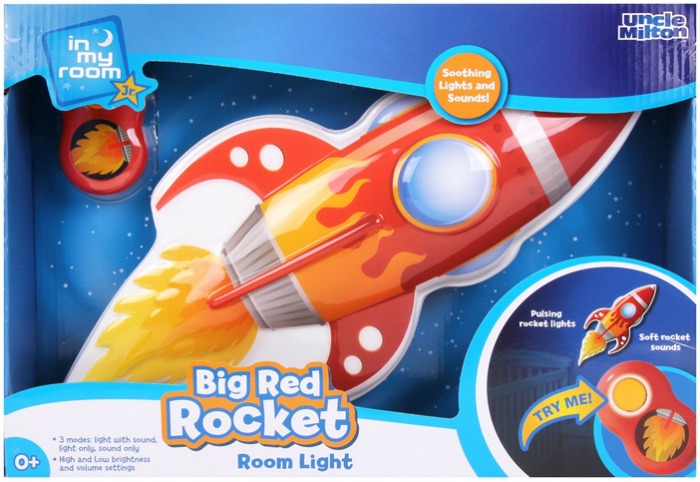 It’s part of Uncle Milton’s “In My Room Jr.” series and they call them “infant room lights”. There’s definitely a smaller kid vibe to this line, but it certainly shouldn’t be limited to infants!

At three years old my son is a full on space geek. Our home is littered with space toys of all types. Imagination or reality based – it makes no difference. If it goes to space it is simply the most amazing thing ever according to Jack. I knew he’d love the Big Red Rocket and I couldn’t wait to show it to him! Well let me tell you, when Jack opened the box he flipped his lid. We had to immediately get out the stepladder and tools and add it to our collection. 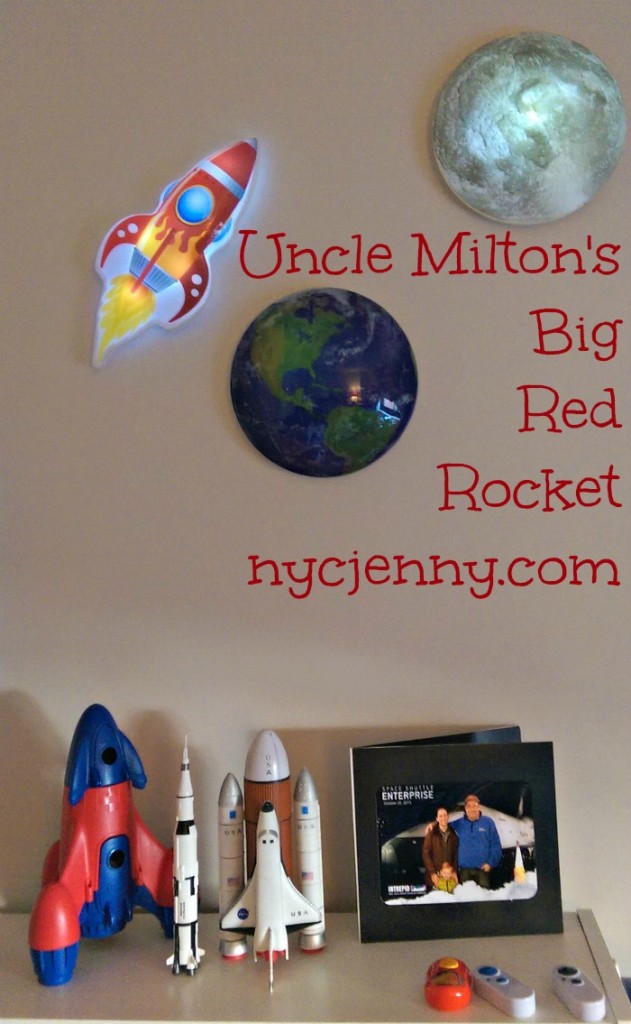 It fast became a part of our bedtime routine and weeks later remains firmly a part of the evening ritual. Moon phase is selected, the Earth turns on, and then Big Red Rocket is fired up. Only then can the door to the bedroom be closed and lights go off.  It’s adorable. All three are controlled by remote control and he keeps the remotes lined up on his bookcase in very particular order.

I took a little video of the three different modes of the rocket. The modes are sound and light, light only, or sound only. The sound is a white noise version of a rocket flying at full power – at least that’s my best description of it. The light pulses a bit as a rocket burning fuel would. You can set the brightness to be low or high depending on your needs, and the whole thing shuts off automatically either 15 or 20 minutes after you start it. (15 for lights and sound, 20 for sound or light alone)

We do keep a fan running in Jack’s room for white noise already, but I really appreciate the extra boost of white noise during the time he’s actively trying to fall asleep. White noise is king in the land of sleep. The light is perfect too – I actually find myself grabbing the remote if I have to come in to his room in the middle of the night. It adds enough light to the room so that I can see what I need to see, but it’s still not bright enough to wake Jack up. Super handy and a totally unexpected bonus of the product.

We are all so in love with our Uncle Milton “In My Rooms”. They are a very sweet part of our nighttime routine. I’d recommend any of them to you if you’re looking for something a little different and special for the space fanatic in your life this holiday season. Check out the rest of the Uncle Milton catalog – they have something for every kid whether they love rainbows, tractors, sports, space, Disney, nature exploration or dinosaurs. We’ve had Uncle Milton lighting up bedtime for almost a year now and remain just as charmed as we were the first night.

Disclosure: Uncle Milton sent us a free ‘Big Red Rocket’ for the purposes of writing this review. No other compensation was received and all opinions are my own.